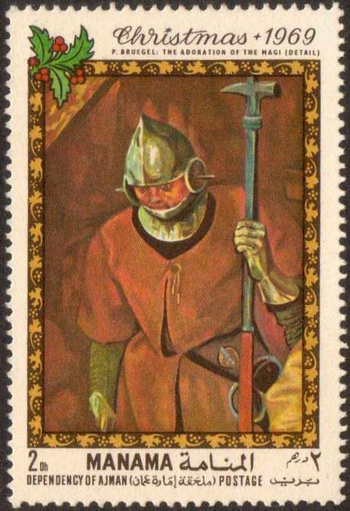 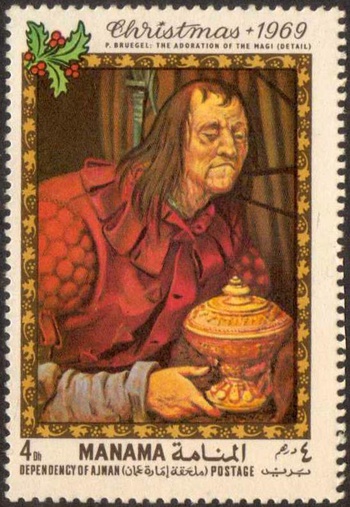 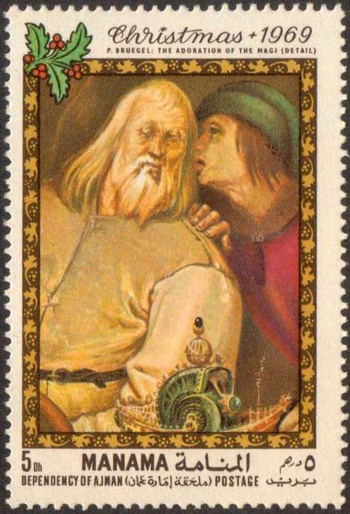 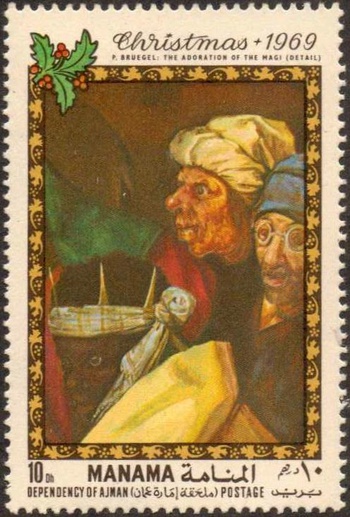 These are four 1969 Christmas postage stamps issued by Manama, Dependency of Ajman on December 25th, 1969 - Manama is a small township in the United Arab Emirates, an exclave of the emirate of Ajman. Few collectors would realise Manama was a remote agricultural village consisting of a few adobe houses on a plain overlooked by the Hajar Mountains. In 1963, Britain ceded responsibility for the Trucial States' postal systems. An American philatelic entrepreneur by the name of Finbar Kenny saw the opportunity to create a number of editions of stamps aimed at the lucrative collector's market and in 1964 concluded a deal with cash-strapped Ajman to take the franchise for the production of stamps for the government. These stamps, luridly illustrated and irrelevant to the actual emirate of Ajman (editions included 'Space Research' and 'Tokyo Olympic Games') became known together with stamps produced by other Trucial States at the time, as 'dunes'. Between 1966 and 1972, there were a total of only 1255 different Manama postage stamps issued, and therefore there are no Scott stamp catalog#'s assigned.
TOPIC - (Christmas) - "Scenes from the Adoration of the Magi" - a 1564 oil painting by Flemish painter Pieter Brugel the Elder which hangs in the National Gallery in London
** Collector Issue - All are in Mint condition, no hinge with original gum
Denominations: (2) dirhams, (4) dirhams, (5) dirhams, (10) dirhams