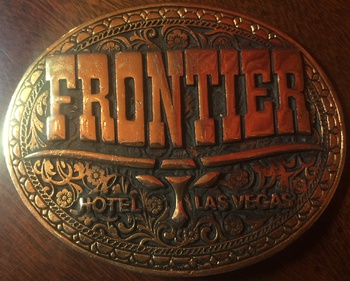 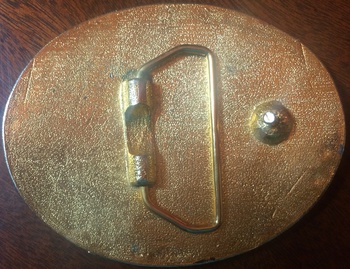 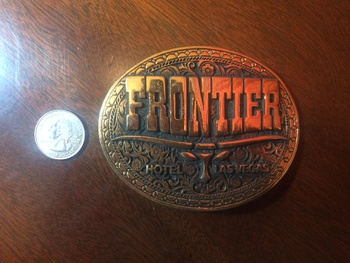 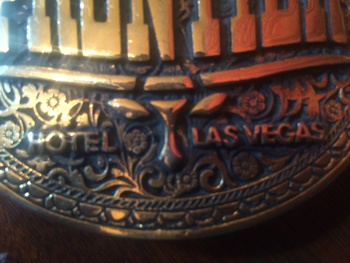 A little while back at my local swap meet, I procured this gem. I paid a little too much for it, at $7, as they sell on eBay for anywhere from $5-$10 on average, but I didn't buy it to resell, so it really doesn't matter.

Vintage casino memorabilia is something I have always enjoyed minority collecting every now and then when a piece comes available that is vintage and peaks my interest. It is not a hardcore collection like I have with cufflinks, but more of a casual light collection that I occasionally sell pieces from and just collect in general.

The wife and I are vintage Vegas types, and when the Sahara went out of business and held a massive liquidation sale, we went nuts. We have signage, slot chairs, poker equipment, menus, you name it. Sahara was a personal favorite.

This belt buckle was more just an impulse buy. I didn't even check eBay before I started haggling with the seller (he originally wanted $10). The story behind the Frontier is quite an interesting one in its own right. It was the second hotel casino ever built on the Strip, and it was once owned by Howard Hughes. It was the first hotel casino in Las Vegas to host Elvis Presley in 1956 (he didn't do well and didn't come back for 13 years) and it was the first to host Siegfried and Roy in 1981.

In its later years, it became quite a bit run down and was plagued with a never-ending culinary union strike. The family eventually sold it in 1998 to a billionaire investor for $178m. He went on to sell the property before the economic collapse of 2008, for $1.2b, unimproved. Yes, you read that right. He managed to make a BILLION dollar profit on the deal. He used $775m of that profit and bought the Treasure Island Resort and Casino in cash pretty much.

The people that bought the Frontier massively overpaid, and they have not been able to sell or develop the property since. The Frontier was imploded and the land currently sits vacant.

This cowboy style brass belt buckle is a nice relic from the old sawdust joint.