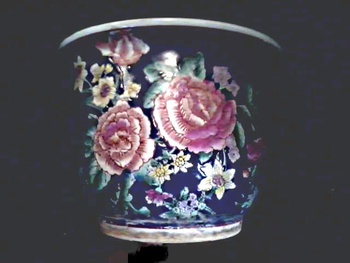 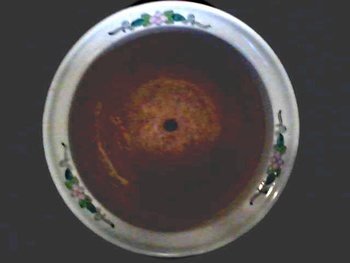 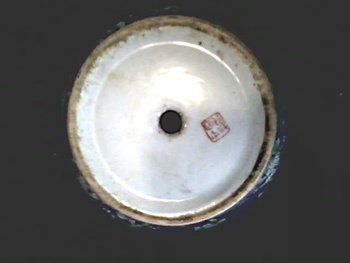 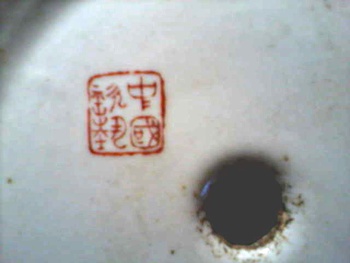 This was basically a rescue. I nice mid-century Chinese made porcelain cache pot. The slightly raised Peonies are on a dark blue background (famille noire) which is traditionally black but dark blue puts it in this category too. It's held many a plant and has mineral deposits inside and out. I think vinegar might remove some of the outside calcification but it may have already damaged the colored glaze at the bottom as it has seeped from the inside out. Gotheborg's site shows this mark to be a variant of #501 which is a Zhongguo Zhi Zao - "China Made" mark. The zhong character is drawn as a bow and arrow and surely dates its to the Cultural Revolution period (1966-1976). -Mike-

This four character mark means plain and simple, Made in China, written in Chinese. In these marks the characters are written in the traditional old fashioned way meaning from top to bottom, from right to left. This is the traditional way of writing despite that the name of China has been chosen for the mark which suggests to me a period for this mark, to between the establishing of the Peoples Republic of China in 1949 and the Cultural Revolution in 1965-70.