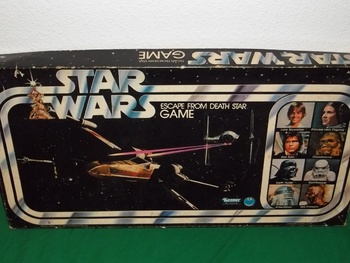 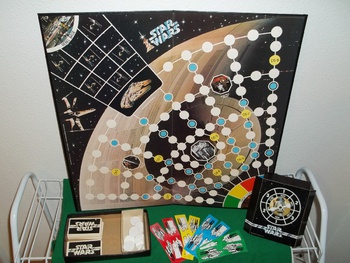 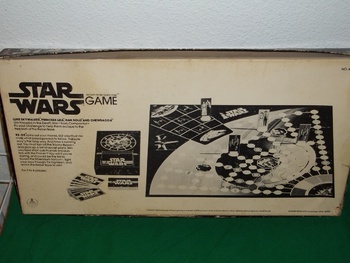 Star Wars is an American epic space opera franchise conceived by George Lucas. The first film in the franchise was originally released on May 25, 1977, under the title Star Wars, by 20th Century Fox, and became a worldwide pop culture phenomenon, followed by two sequels, released at three-year intervals. Sixteen years after the release of the trilogy's final film, the first in a new prequel trilogy of films was released, again released at three-year intervals, with the final film released on May 19, 2005.
This is one of two games released by Kenner almost concurrently with the original Star Wars movie (Star Wars: Destroy Death Star is the other). Each player races through the Death Star with two tokens (Luke/Leia and Han/Chewbacca), picking up good/bad 'Force' cards when they land on blue spaces. Both tokens must reach the Millennium Falcon and fight their way across TIE Fighters to win the game! Board features some cool prints from the movie as well as a great outside view of the Death Star.
Once you finish this game you can then breakout your 'Destroy Death Star Game' to launch your X-Wing assault and complete your Star Wars gaming experience!