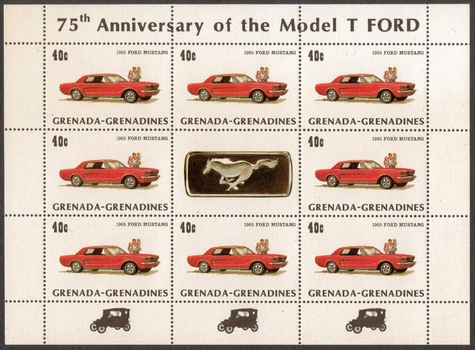 This is a 1983 souvenir sheet of postage stamps issued in Grenadines as part of the "Cars Series" of which there were 10 different cars depicted and denominations from 10 cents to 4 dollars - 75th Anniversary of the Model T
Issue date May 4, 1983 - (8) denominated postage stamps, imperforate
** Collector Issues / MNH OG = Mint No Hinge, Original Gum - unused
- Scott# 546 - (40) cents - 1965 Ford Mustang / Mustang emblem in center
** Grenada is an island country consisting of the island of Grenada and six smaller islands at the southern end of the Grenadines in the southeastern Caribbean Sea. The Grenadines comprise the two main islands of Carriacou and Ronde north of Grenada. Both Grenada and Grenadines have the same government and issue the same types of postage stamps except the Grenadines are noted as Grenada-Grenadines.