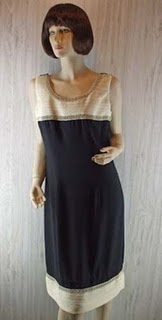 Working steadily she had managed to clear 4 closets of their assorted junk. She had piles of report cards, band concert flyers and assorted birthday and anniversary cards her parents had saved over the years. The clothing had been dispatched to a large contractors garbage bag and was in the back of her car ready to be donated.

She just had one more closet to check out and then she could make her trip to the clothing bins and get rid of 50 years of stuff that neither she or her siblings wanted or needed. They all knew that this day would come and had dreaded it for their parents had been proverbial packrats, saving everything and anything, afraid to part with memories from the past. She just didn't understand the point in saving all this "stuff." Better to donate it and be done with it.

She decided to gear herself up with a cup of strong black coffee and sneak a cigarette. Memories of puffing away in front of her mother who was horrified by this first sign of rebellion spread through her brain. She'd been an obedient child and teenager, a wind-up child, who was wound up every morning and performed as expected.

Then she started college and picked up smoking, more for effect and to piss off her mother, trying to shake up the calm her mother always projected. When low on funds from her part time job she strategically placed an ad from the local paper advertising payment for blood donations on the desk in her room and the next day found a 20 dollar bill in her wallet. She knew her mom had placed it there, not wanting her daughter to sell her blood for cash.

Coffee and smoke break over, she sighed and attacked that last closet. This had always been the forbidden closet, the one her mother kept under lock and key. She never understood what could have been so important that it had to be locked away, but knowing her mom for the mundane slightly overweight woman she was, it never crossed her mind to jimmy the lock and check things out.

She found the key for the closet in her mother's jewelry box, buried deep beneath her mother's costume jewelry. She inserted the key in the closet and opened the door. Inside she found garment bags filled with clothing that would have made Twiggy ooh and ahh with delight. Paisleys, brocades, silks, chiffons and crepes from the 1960s cut expertly to show off a beautiful young figure.

But of all the beautiful dresses contained in her mother's secret closet, she could not help but fall in love with the most stark of all. It was a 1960s Leon Haskin cream and black crepe cocktail dress. It was a simply cut cocktail dress, but oh the gorgeous shirred cream crepe at the bodice shoulder and lower dress was just delicious. Carefully she slipped the dress on for she had managed to keep her figure while her mother had not. The dress fit like a second skin and made the most of her curves. She wondered how her mother had found this fabulous dress and what occasion she had worn it for.

Unfortunately when she had asked her mother about her life before her marriage to her father, her mother had never offered more than a perfunctory "well now that's not important and what's important is the future."

So she never knew that her mother modeled for her living in Melbourne and had been the toast of the town for several years running. It was on a fashion shoot that her mother had met her father, a gofer for the fashion photographer handling the shoot. Their passion had ignited after just hours and in a matter of days they were wed. She left Melbourne for the simple life in Des Moines, Iowa where her husband went back to work at the family business making pork rinds after his photography career fizzled.

"Oh well", she thought, "Time to get down to business. I'll just keep this one dress since it would be a sin to waste it and donate the rest." And so the paisleys, brocades, chiffons and crepes went into the contractor garbage bag ready to be sent to the nearest thrift store.

The dress pictured inspired me to write this fictional story. I found this dress in my search for vintage treasures. I found this dress from the Australian manufacturer in upstate New York. I tried to imagine how the dress wound up there. The story just flowed out.

Haskin came from a family of fashion designers and manufacturers. His father Henry started his business, Henry Haskin and Co Pty Ptd, in Flinders Lane in 1919. Leon worked with his father for six years prior to the latter's retirement in 1959. Previously Leon had worked at the McBeath warehouse. Haskin relocated his business to Richmond in the 1980s. 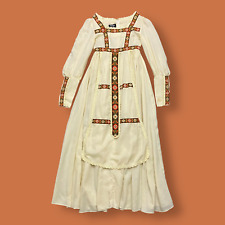 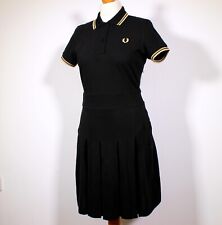 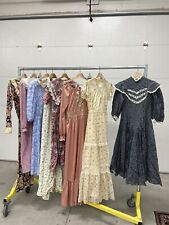 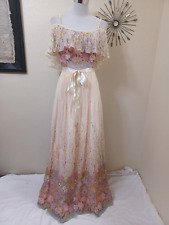