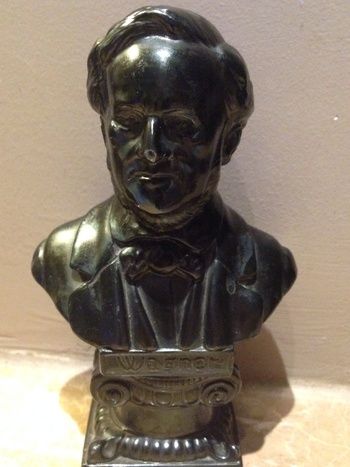 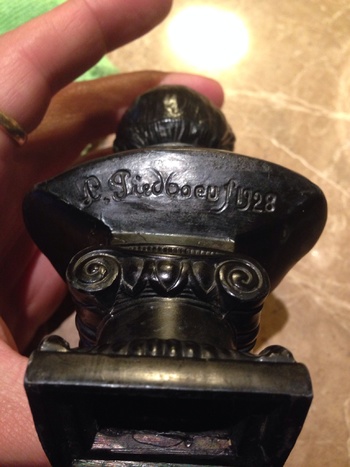 Found it strange that this wasn't a religious theme piece and haven't been able to find more like it, I have compiled a list if other sculptures he has done below.

Lambert Joseph Piedboeuf ( born February 3, 1863 in Aachen , † 29 November 1950 in Bad Reichenhall ) was a German sculptor who dealt almost exclusively with religious themes . He is regarded as " the most distinguished Aachen sculptor of the century " and also acted in a neighboring country.

Life:
Piedboeuf Lambert , son of Hippolytus Piedboeuf upholsterer and the Carolina Elizabeth Linden, was a pupil of the Aachen sculptor Gottfried goddess (1830-1879) and after a year of cooperation at the Cologne cathedral workshop volunteer at the Aachen sculptor Johann Lorenz Oprée ( 1846-1900 ) . By 1887, he started his own business . In addition, he worked as a professor at the School of Applied Arts Aachen.

Lambert Piedbeoufs grave figures and reliefs include 1919 the grave jewelry catalog of the Württemberg metal factory. These works were carried out as galvanoplastics . In his spare time he devoted himself to Aachen vernacular language and also belonged to the board of the association " Aachen dialect e.V. ".

His work:
Aachen: Marian column, design of the Calvary of St. Nicholas, a Crucifixion, a Pietà in St. Elizabeth, an enthroned Madonna and Child with a figure of Christ in the Sacred Heart Church, grave monuments to the pastor of St. Paul and the Fam. Heinen in Aachen Campo Santo in the Western Cemetery II in Aachen and sculpture in Holy Cross and eight statues on the facade of City Hall:
1900 Frederick I ndEntwurf v. Christian Mohr [2] adj 1887
1900 Frederick II. DSLB.
1900 Wenzel dSLB.
1900 Ferdinand I. n.d.Entwurf v.Mohr 1886
1900 Rudolf II. N.d. Design Mohr 1887
1900 Ferdinand II. N.d. Design Mohr 1886
1900 Leopold I n.d. Design Mohr 1887
1900 Joseph II. DSLB.
Clervaux: altars, Pietà, Crucifixion stations and chair of the parish church of St. Cosmas and Damian (1910-1912)
Echternach (Luxembourg): Statues at the former court house, 1896
Moresnet-Chapelle: Three figures for the crucifixion scene at the chapel
Simpelveld, General Motherhouse of the Sisters of the Poor Child Jesus: Statue of St. Alphonsus Liguori of..
St. Wendel, high altar in St. Wendelin, 1896
More work can be found in Mönchengladbach (1870-71 war memorial), Kempen and Viersen, but also in San Antonio, TX (1930). His grave attractive sculptures have spread throughout Germany.