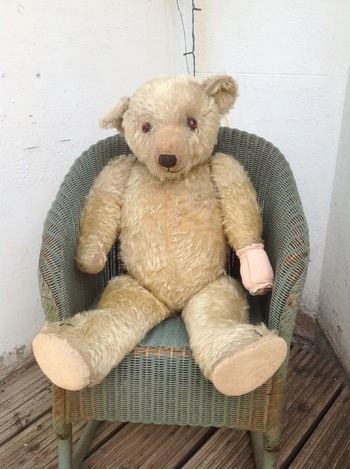 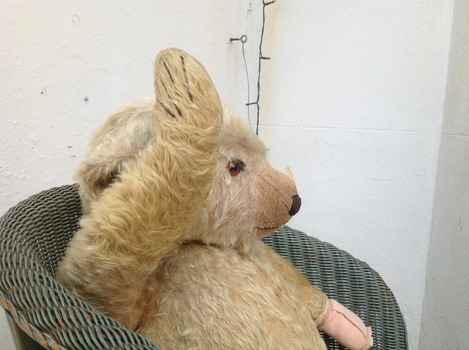 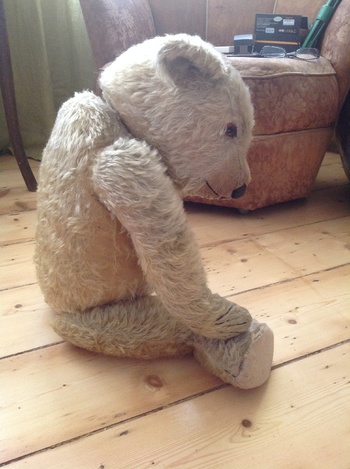 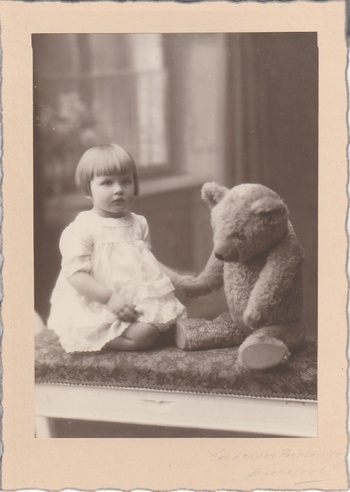 Hi all teddy bear aficionados…
Please can anyone help me to identify this bear? He has been in my family for many years.
His name is Bruin and he is a fairly large bear, approximately 28 inches tall from the crown of his head to the bottom of his feet.
He has jointed arms, legs and head.
He belonged to my aunt and the earliest photo I have of him is with her, when she was about a year old, from 1926 (see photo).
I think he was originally golden mohair but he has faded and is getting a bit bald in some areas.
He has no tags, studs or identifying labels.
One of his ears needs stitching back in place – has been repaired before and is hanging on by a thread or two.
He has a humped back and four black stitched claws on his paws (see photos). Both his paws are in need of some repair… one much worse than the other and is bandaged because otherwise he will lose his stuffing!
His muzzle is bald and looked pretty similar in the photo from back in 1926.
He has four black stitched claws on each of his feet.
His nose is vertically stitched and he has a smiley kind of mouth, a very benign and gentle look about him!
His feet pads are sturdy and have some kind of insert – rubber or card.. I am not sure.
The feet look pretty similar in the photo from 1926 so I wonder if they had already been restored then, suggesting that he might be earlier than the 1920s.
His eyes are glass – brown surround with black pupils.
There is black paint(?) behind the eyes. He survived smoke damage in a fire about 5 years ago so the black paint has gone a bit crackly.
His stuffing is hard – excelsior/wood wool?
He has a front seam and a back seam – but not sure which one was sewn up last.
I have recently checked out various antique teddy bear internet sites but have failed to find a match for Bruin… so am more and more intrigued to find out about his origins…
I would love to know what make he is, whether he is European or American, or any other identifying features anyone might recognise?
Is he a valuable bear or only worth something to my family?
Many thanks in advance for any thoughts about Bruin’s origins and ancestry! 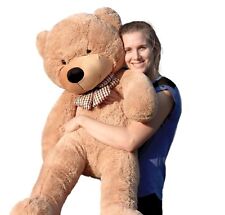 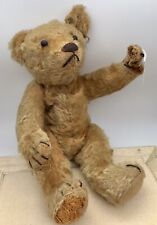 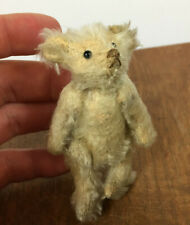