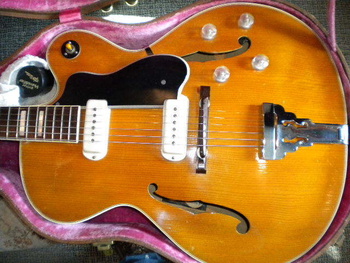 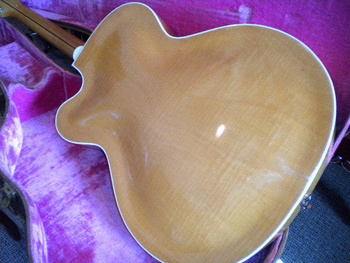 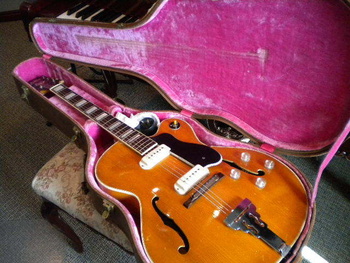 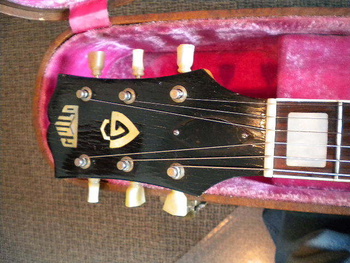 Hello Everyone, first post in this forum. I have always loved Guild guitars. But when I came across this Guild X 440 I had to have it. Any info you folks have would be very helpful. I have had starfires, X50, T100. This 440 is a 1953 with serial # 1008. From what I have read, Guild started their serial numbers at 1000, so I am assuming this is the ninth guitar Guild made. It is in excelent condition as you can see in the photos. The pots and input jack are the only things replaced on it. I have seen x400s posted but I have yet to find anyone else with an X440. I really wanted a 50s X500, like Dave Gonzalez of the Paladins, but from my reaserch it seems that the 400 series is pretty much the same as the 500 series except the hardware is chrome instead of gold. Is this true?
I would like to install a guild logo bigsby on it because I would like to have it for my playing preferences, but I am torn. A bigsby would not hurt the guitar since it installs with 3 screws on the bottom just like the tailpiece that is on it now. Of course I would never sell the tailpiece. If I ever decide to sell it, which may be when I am dead, I would put the original tail back on. Does anyone know the original selling price? Or how many of these were even made? I have also read that the 400 series were put together with parts from the x350s and other, but it was in guild's original catalog so I disagree with that notion. At least for the first year anyway. Any one have a Guild with a lower serial number than 1008? I play blues mainly which is why I am thinking about the bigsby. The Franz pickups on this guitar will go from a mellow bassy jazz tome to an all out screan on the bridge pickup. It seems very versatile to me. Well anything you folks can tell me about this guitar would certainly be appreciated. Thanks for letting me ramble on about my new addition.