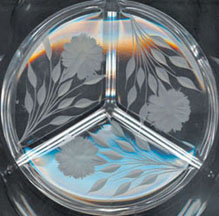 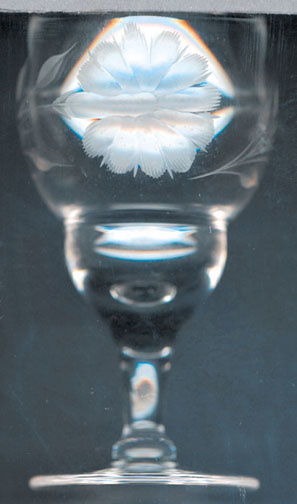 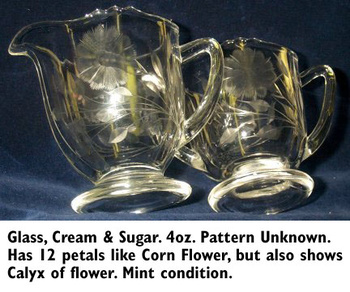 This is my mother's crystal pattern - very similar to Hughes Cornflower except for the centre of the flowers which do not have the cross-hatched circle. The original set of glasses she bought in the mid to late 1940's before she married - eight each of red, white & champagne glasses - all have the "double bowl" shape as per photo of glass shown. Her collection of this pattern has grown considerably over the years. She has water pitchers, other wine glasses, water tumblers, platters/plates, cream & sugars, etc. Unfortunately, we have never seen the same shape glasses as these as she would like to replace a couple that were broken by us kids over the years. We have no idea what the pattern name is nor who produced it. We think it may have been produced by R.G. Sherriff who once worked for Hughes but this has not been proven. We would very much like to know if anyone can identify the pattern and the maker. She once took a piece(s) to an antique appraisal group.... they could not identify it and told her the pattern was probably a "mistake"!!! But we have found so much of it out there and collected so much of it that it cannot have been a mistake and must have been produced by someone somewhere!!!