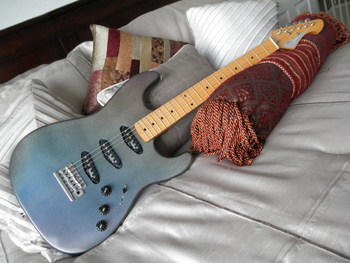 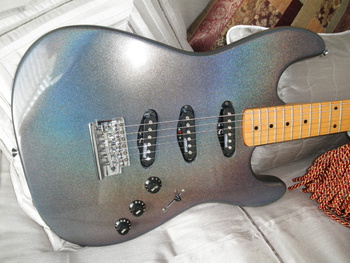 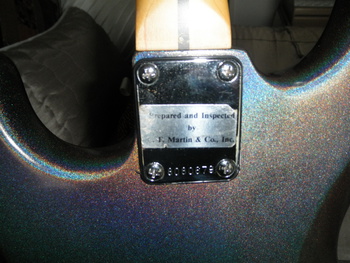 This is one of a few Stingers I own. This SWG was in need of refurbishing and so became a project. All electronics were replaced with new and I refinished the body with a color-shifting laquer. While this one's not original, I think she's a beaut!! These guitars are pretty underated but intrest is rapidly rising as the word gets out how good these axes really are.
Some History:
C.F. Martin Company, Stinger Model Guitars 1985-1996
In November of 1985, C.F. Martin unveiled its Stinger line of solid body electric guitars and bass’s.
Stingers were built to C.F. Martin specifications and are high quality.
Most Stinger guitars were made by the world renowned Samick Piano Company located in South Korea and shipped to the C.F. Martin factory located in Nazareth, PA. for a final inspection and set-up. In 1989 Martin expanded by 10% adding 6,200 square feet to their warehouse to accommodate for the Stinger line. After final set-up some guitars received a clear decal placed on the seven digit, serial numbered neck plate that stated “Prepared and Inspected by C. F. Martin & Co., Inc.” before being distributed to dealers but, not all Stinger guitars have a serial numbers. The Stinger guitar line was advertised as “Stinger from the Martin Company”. C.F. Martin also advertised and sold Stinger brand guitar strings and also in 1989, amplifiers and effects boxes. All Stinger models had a one year warranty on the guitar and 90 day’s on the electronics. C.F. Martin never actually produced Stinger catalogs, but they are known to be listed in some Martin catalogs, magazines and flyers. C.F. Martin claims they did not record any serial numbers (when issued) so detailed records are unavailable. Early Stingers were four basic body styles, a conventional Strat shape, a Strat-style with an arched top, a Tele and a Precision style bass. These came in a variety of finish and pickup configuration options. Headstocks on early versions were a kind of modified Strat-style six-in-line, with a pointed throat and slightly hooked nose, with a painted (or decal) triangular Stinger logo running under the strings. Later issues had 80s style "Jackson" look. All had bolt-on maple necks and fret boards of both maple or rosewood. Guitars were 25.4”, and the basses were 34” scale.
Sources other than available flyers do not mention all the fingerboard and hardware color but most appear to be Grover equipped.
The basses followed a similar pattern. The SBX sported one split-coil pickup, volume, tone and black, candy apple red, white pearl and gun metal finishes, with matching colored neck and colored chrome hardware.
The SBL-10 (1986-1988) offered a split neck pickup and single-coil bridge pickup, with two volumes, master tone, three-way select, cream, black, white, and black pearl finish option, with matching maple neck and hardware.

The 1988 November Stinger price list contained the SWG strat ($281), SGV ($294), SSX Strat ($308), and STX ($330) guitars and the SBX ($337) and SBL-10 ($367) basses, the black SSX and SBX now available in lefty versions (add $15). Essentially these were unchanged in options. Other known and rarely seen Stinger guitars are the SSX-10, SSL-20, SSZ, SPX, SRX and ST4.
Three guitars and two basses were listed in the Guitar World 1990-91 Guitar Buyer’s Guide.
Basses were the SBL and SBL-105. The SBL was a P-bass with split-coil and single-coil pickups, rosewood ’board, and black hardware. The SBL-105 is a five-string version of the SBL. These later models had a “Shark Tooth” headstock which was originally designed by Randy Rhoads for his custom built Jackson guitar.
In the Guitar World 1992-93 Guitar Buyer’s Guide only one Stinger guitar was listed, the ST-2, an inexpensive Strat with three single-coil pickups. No basses were listed (The ST2 was available in a guitar and bass model).
In 1993 Martin Stinger sales lagged. The Stinger ST-2, tremelo Strats in black, red and white were still in the 1996 C.F. Martin catalog.
Stingers are well built guitars that setup well, with a decent hefty feel. Stingers were always well made, clearly “Martins” and giving the competition a run for their money some might say. However, C.F. Martin Co. claims they where only distributors of the Stinger due to the Trademark issues. Still, C.F. Martin is heavily associated with the Stinger guitar line.