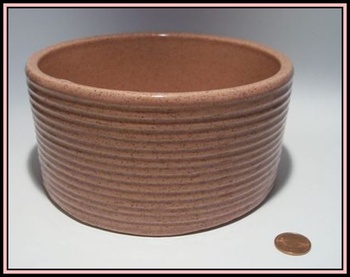 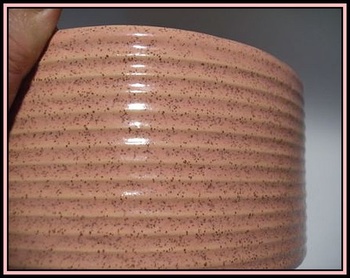 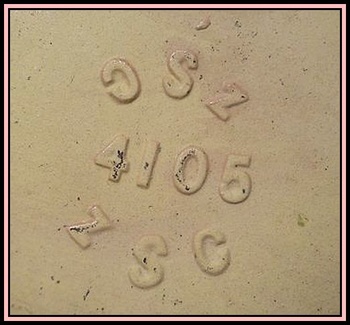 Thought I would just post this old PINK ZANESVILLE pottery bowl. Has some Gold Specks in it. Marked on the bottom with *backwards* ZSC letters, then also the letters of ZSC and the number of 4105.

Zanesville Stoneware Co., [aka ZSC], was one of the oldest pottery companies in North America. It was located in Zanesville, Ohio, along with approximately 31 other pottery companies in that same geographic area. In 1874 the Ohio Encaustic Tile Co. was formed, however, this company was later purchased by E.G. Bowen & Co., which then reorganized to become the Zanesville Stoneware Co. ZSC was destroyed by a fire in 1990 and relocated to a neighboring area, however, it is apparently no longer in business.

ZSC is a great pottery to collect because much of it is still affordable. The reason it is affordable is because a lot of it was not marked, so only experienced collectors know what to look for. However, once you know what to look for you will be hooked on this pottery. Why? Because it is very versatile and can fit into just about any type of décor including modern or primitive. It is heavy, durable, functional, and beautiful pottery that can be used indoors or out. The shapes are simplistic, but charming and range in size from huge to about 4 inches. ZSC stoneware came in matte green, lavendar, blue, yellow, oyster, burgandy, aqua, and some blended and art glazes.

The clay on ZSC pottery comes off as a yellow buff color. You will likely see some of the yellow peeking through the glaze, or it will be apparent on the bottom. Some bottoms were glazed, some not, but you will see the yellowish clay 99% of the time. Most ZSC has pinpops, glaze misses, and runny glaze. Art pottery lines include: Matte Green, Neptune, (deep green w/copper); Vulcan; Ebonello; Zasko; Verdantone; Montrose, (see reference book listed at bottom for more info).

Backstamps used on ZSC include incised stamp marks, raised marks, hand incised marks, circular stamp marks, block letter and number marks, and paper labels. For instance, a piece might be marked: Zasko, Country Fare, Pickrull, Wally Frank, ZSC, or with various florist stamps since ZSC was also made for florist shops, or no markings at all which is even more typical.