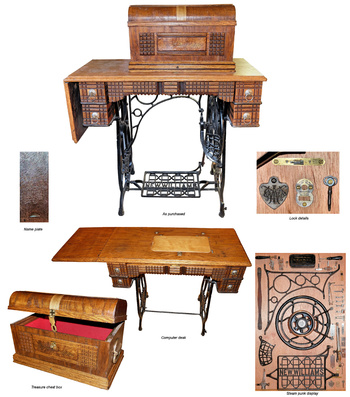 I bought this turn of the Century New Williams Sewing Machine Built in Montreal Canada. (For just $135 Cdn) with the intention of only modifying the top cover. But I could see that the base would make a good computer desk, which I needed to replace. I really like the old growth fine grain oak drawers. Each with solid black cast iron supports. I removed the non supporting parts & treadle mechanism with the intention of taking them to the recycling depot. But then I thought it would make a good Steampunk display. If that's what this is ? I am still adding refinements to the domed box.
Some of the locks have a Patented date of May.1.1877. They really built them to last. Did I feel guilty of messing up a old antique like this. No. Nearly ever part was used. It will last another 100 years.