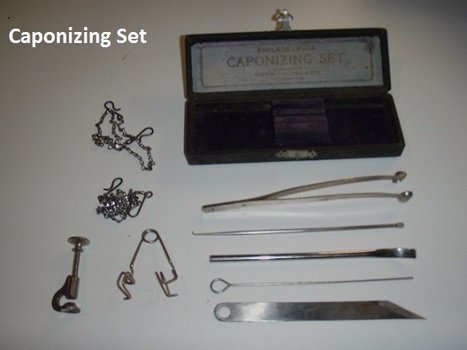 A capon is a castrated rooster. Caponizing will produce a much larger and plumper bird in a shorter time than if let grow naturally. It is not done as much as it was done in the past, but, some farmers still offer this alternative for an oven roaster.
The testicles of a rooster are internal, so, removing them is in reality, an operation. This caponizing kit includes a scalpel, a probe, a spreader, small chains or strings to secure the animal during the operation, a testes remover, and a punch to mark the comb of the animal to show which roosters were caponized.
How to use it: Roosters have their testes located in their chest, behind the third rib, and under the skin. You make a cut there with the scalpel and pick them out using the cupped remover. After this brief operation, it is recommended that you disinfect the wound and keep the animal separated from the other birds for a day or two to let the wound heal before returning them to the flock.
I've seen animal husbandry photos of caponized birds and they can grow one and one half times larger than non-caponized birds in the same length of time.