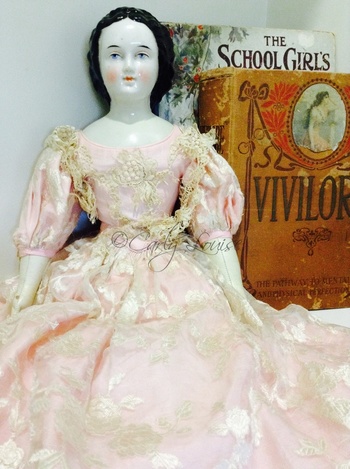 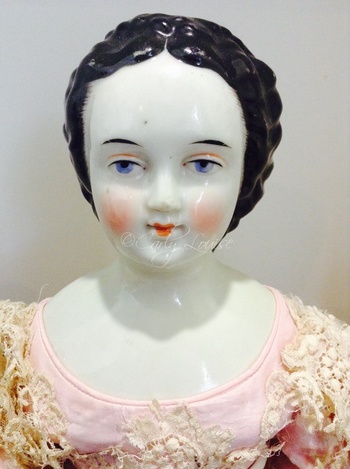 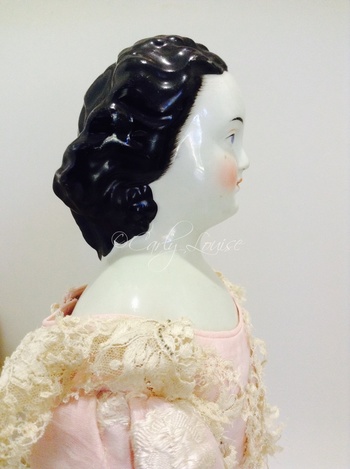 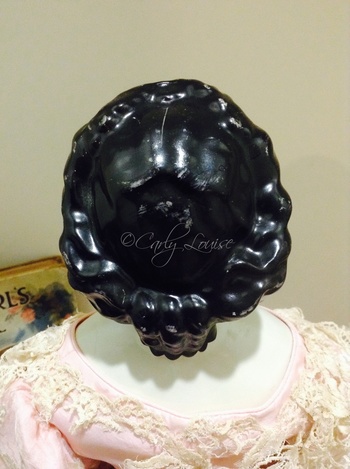 Celeste is a stunning old girl who I've only just recently added to my collection. She has a bit of a non-nonchalant, dreamy, hypnotic look to her, very much a characteristic of many china head dolls attributed to German firm Conta & Boehme (the same factory that produced so many incredible china fairings and figurines throughout the 19th and early 20th century).

This example stands regally at 22" in her impressive and grand costume. The pale pink colour of this delicate and well-made vintage dress compliments her pink flushed cheeks so well. The gown is made of taffeta with a stunning and fragile lace overlay. I estimate it to have been made around the 1940's or 50's. With layers of old undergarments-two highly-starched cotton petticoats and a swish pair of pantaloons, hand-made leather shoes, old socks sewn onto the legs and that fancy do, she's a woman ready for a night on the town.

Celeste's cloth body appears to be hair-stuffed, and looks to be of a decent age. Her well-stuffed arms are kid, feature articulated fingers, adorned with a tiny bead ring, and are a lot newer than the body. From memory there's still remnants of the stumps of her older arms. Undressed, I see that the body is a 'wasp-waist'-very long in the torso with large roomy hips.

As mentioned, the visage is very much inline with Conta & Boehme's facial painting, of which they produced many dolls with that sleepy, heavy-lidded and small pouty mouthed look. Celeste isn't marked on the outside of the shoulder plate, and I haven't removed the head to inspect inside it, due to how well the tapes front and back are sewn onto the body.

The mouth is well molded and deep, on certain angles it looks like the lips are almost parted. Her nose has a bit of a rub in the china, the heavy eyelids are nicely molded. There's the occasional kiln spotting here and there.

Celeste's hairstyle (exhibits C & D) may be described as a slight variation on a Waterfall arrangement, a popular style of the mid-to-later Victorian era. She has fantastic brush marks around the temples, the hair is gathered and sits low towards the back of the neck.

This example, with her fancy and eye catching coiffure that surely no male china head can resist, can be dated to around the 1860's, the golden age of china head dolls, in my personal opinion.

Celeste is now spending her twilight years relaxing with other C&B kin while appearing impossibly disinterested in anything and everything around her.