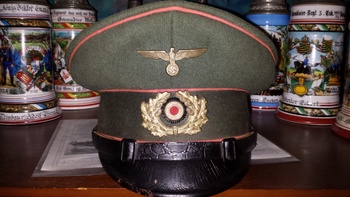 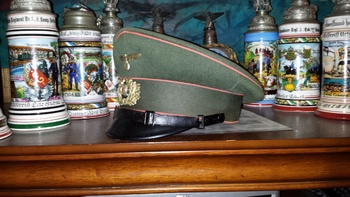 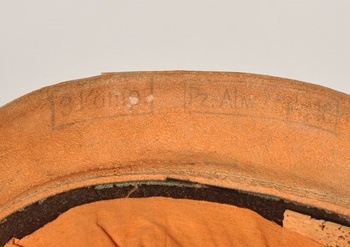 A visor cap of a NCO in a Nazi Panzer-Abwehr (tank destroyer) battalion in the transitional color used by the old Weimar Republic. The pink piping was used by Motor Transport troops (Kraftfahrtruppen) in the old army and carried over to the new Nazi Wehrmacht to designate this particular branch of service. The wreath and national eagle symbol are struck in zinc instead of the more common aluminum. At the time that this cap was used (1936) Germany was forbidden to have armored units in the Wehrmacht, but panzer destroyer units were permitted. Later, when Hitler scrapped the Versailles treaty, the color (rosa in German) was incorporated for use in the Panzer formations. The cap is unit marked under the sweatband "3rd Company Anti-Tank Battalion 16." This same very rare cap is pictured on Page 47 of the reference book by Tony Vickers "German Army Visor Caps 1871-1946"