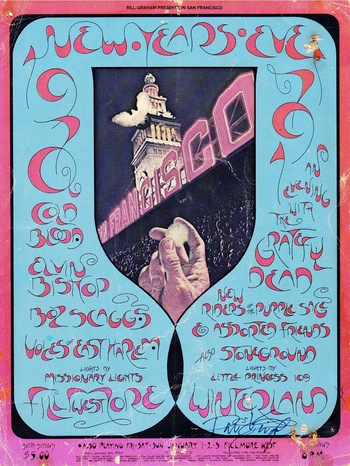 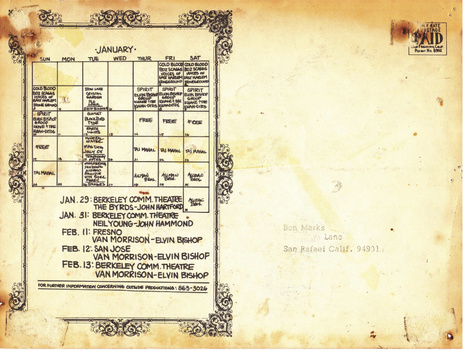 David Singer was one the most prolific San Francisco poster artists of the late 1960s and early 1970s, creating more than 6o concert posters for rock promoter Bill Graham between 1969 and 1971.

One card in particular is perhaps my most cherished material possession. It’s a smaller version of a poster known to collectors as BG-263, which advertised a pair of 1970-1971 New Year’s Eve shows at Graham’s fabled Fillmore West and Winterland venues.

I attended the show at Fillmore West because I was really into Cold Blood at the time, and Elvin Bishop and Boz Scaggs were always good (the opening act, Voices of East Harlem, was a gospel-like outfit whose glorious refrains still ring in my head). The Winterland show was headlined by the Grateful Dead, with the New Riders of the Purple Sage and Stoneground rounding out the bill. I had just seen the Dead and the Riders (Jerry Garcia was still their pedal-steel guitar player) earlier in the year at a dumpy little dive in San Rafael called the Euphoria. I had never seen Cold Blood before, so off I went.

The poster and postcard, like most of Singer’s art of the time, was based on a photo collage, whose elements included a hand, a dove, and the San Francisco Ferry Building. My copy suffered mightily from my affection for it, as its numerous thumbtack holes prove. I moved it from wall to wall in my room, and it even lived for about a year in a tree fort I had built in some oaks behind our house—thanks to a rainy winter, the thumbtack holes have rust stains around their edges, and the card’s once-vibrant colors are not as bright as the day it came off the press. How it survived my college years, I have no idea.

Years later I asked David Singer to sign it, which he did in the lower-right corner.