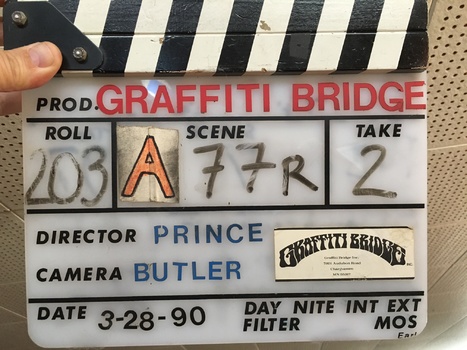 This is the movie slate used for "Graffiti Bridge," Prince's sequel to "Purple Rain". It would be Prince's final feature film. The slate is weathered but in good shape. You can see that this slate ended on roll 203 which is an extraordinary amount of 35mm for a 95 minute film. Curious if that number is as high as it seems to me to be. (that's 2200 minutes of film! Good lord, could that be right? Or might this also include short ends?) Also note shoot date of March 28, 1990, listed on IMDB as the final date of production. Director of Photography was the great Bill Butler (Jaws, Rocky II, III and IV, The Conversation, Grease, Stripes). Purchased from a Chicago Rental house some years ago. This is a really cool bit of memorabilia from a one of a kind artist. His like won't be seen again for a long time. I used the back of it as an ad hoc slate for years, just to have the inimitable Prince vibe on my sets, and the front writing amazingly never rubbed off.