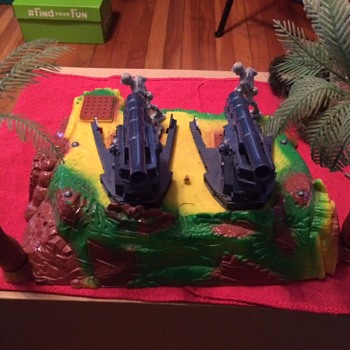 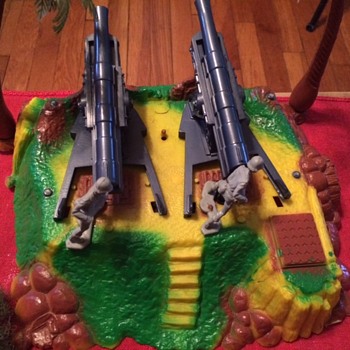 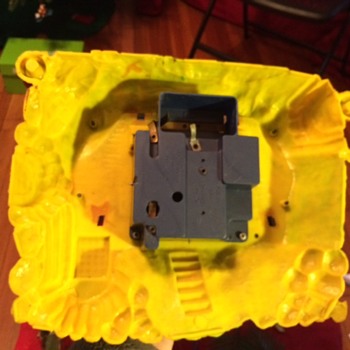 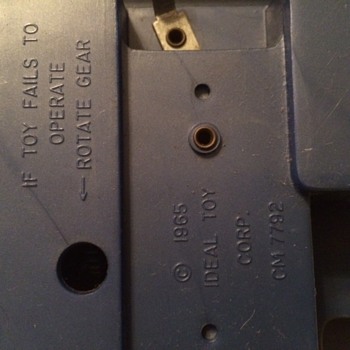 Made by the Ideal Toy Company manufactured U.S. Army (2) Gun Artillery Battery on a mound. It is dated as 1965, and was mine when I was 10 years old. It survived in my old toy box stored in the basement. It has seen some heavy battle in its days. I was unable to find any information about it in my internet search, so if anyone can add any information about this toy, it would be greatly appreciated.

It is a hard plastic WWII 2 gun artillery battery on an elevated mound produced at the early part of the Vietnam War. It has two blue artillery pieces mounted on the mound by small plastic clips on each side of the gun. The one on the left (looking from the front view has had both of them broken off and comes off of the mounting position. The guns once operated off of one D-cell batteries (underneath) and moved backwards and forwards as though firing. There are two brown soft plastic hollow palm trees, one mounted on each side of the 4" yellow and brown hard plastic mound. It has some camouflaged material that was originally supported by four plastic poles that were glued to the mound and "hid" the guns from aerial view.

There are two gray Soldiers that are standing in the same positions, at the ready to load the guns, that they have been at for the past 51 years! What dedication to duty! They are mounted by a small hole in their base that slides onto a similar sized peg on the mound.

The poles have long since been broken off (in combat, I would presume), but I still have two of them. Their mount positions are two on each side of the guns - left and right sides.

There is a small chip off of the mound that can be attached with some glue (yes, it was at the bottom of the toy box too!). I do not know if the motor still works, but obviously, the one gun does not. 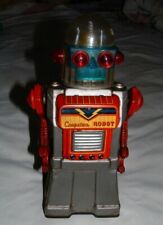 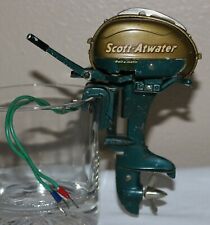 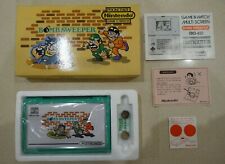