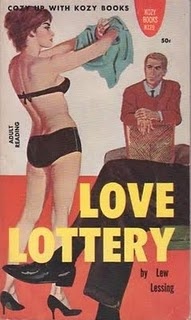 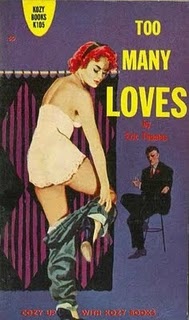 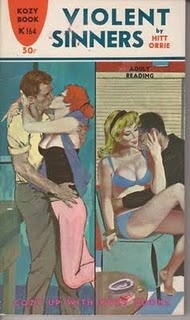 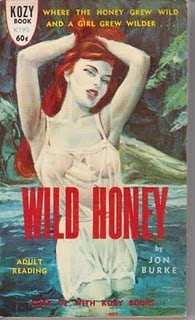 What to do if a bunch of sleazy, poorly written and lurid looking books offend "normal" folk waiting for the bus and buying the Times? The answer in 1961 New York City was to send a contingent of police to the distributor and seize as many as you could. In this case it meant 276,178 copies of Kozy Books.

I am going to guess, given their size, that the books were packed by the hundred, which would mean the cops confiscated 2761 boxes of books, the likes of which appear above.

Kozy "Cozy up with Kozy" books were the brainchild of John Musacchia and Irwin Stillman. A representative group is shown here, but there were more. Each is 160 pages and contains about as much smut as a belly button at Coney Beach. In other words, the text is less offensive than a love story in Ladies Home Journal...but the titles and covers were clearly a problem. To be fair, the books do contain various couplings, each carefully depicted in a manner to arouse the reader, but then so does any book, even if the arousal is a call to action rather than carnality.

The big haul consisted of 39 different titles, which in order to prosecute the publisher had to be read in full by the prosecutors. They divvied them up and came back with the most prurient 8 titles which were in turn given to members of the grand jury.

The result? Eh. Not so bad. The best they could come up with was the titles violated a state law requiring books to clearly indicate the publisher's true name and address in each volume.

The upshot? Kozy agreed to destroy 70,000 books. The remaining 200,000 were returned to the defendants, where most, after reading, ended up in the trash anyway. A few were wrapped in protective mylar bags on book collector's shelves. Yet another true story from the front lines of censorship.

For the record, there were some 100 titles published by Kozy from 1960 to 1963. A partial list appears on the WIKI page, which clearly needs some help...and a more complete list appears in Graham Holroyd's book Paperback Prices and Checklist.

I will, however, list my favorite titles:
Virgin of Spare Rib Hill
Sextories
The Nude Senorita
Split Level Love
Ski Gigolo
The Girl with the Golden G String and finally, "When Men Meet" by "anonymous" which as it was the last one published, appears to have killed the series.
By Jim Linderman from the VINTAGE SLEAZE Art Blog 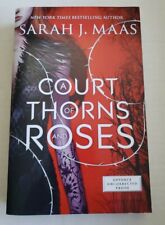 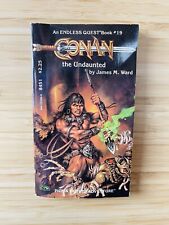 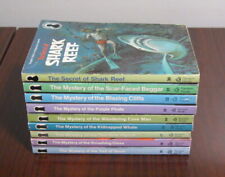