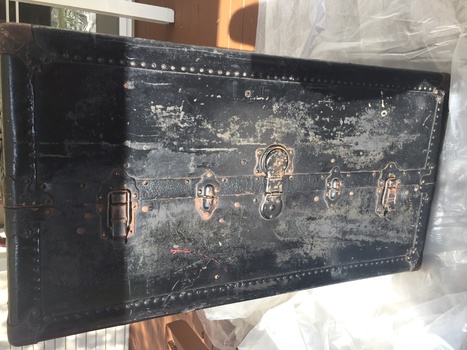 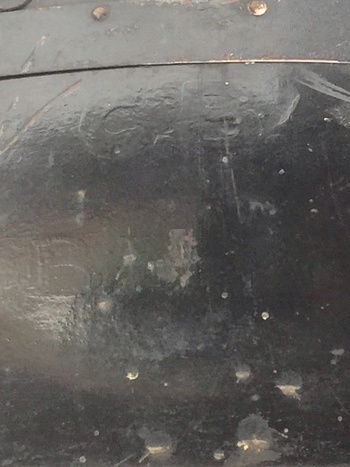 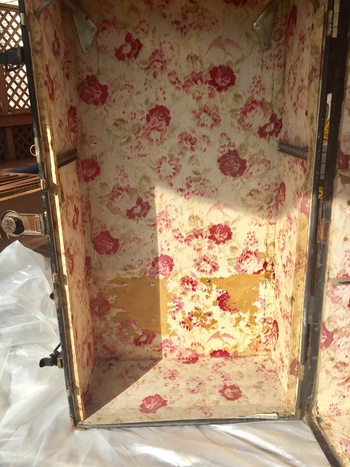 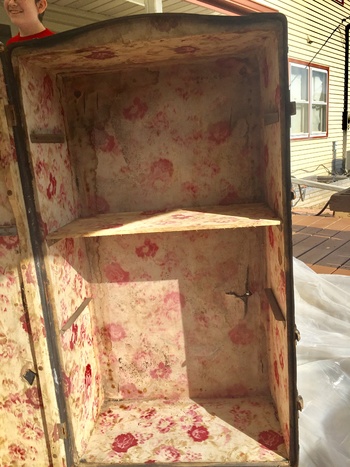 I picked this trunk up from a Restore while on vacation. The story is it was brought over to America from Lithuania sometime late 1800/early 1900 when the original owner immigrated to the US. I'm unable to find any kind of information on it other than what appears to be embossing near the handle. I'm not sure if that would be the owner's initials or some combination of both, as there are two sets. The first reads C.B. The second appears to be B.H.B. though there's scratching on the middle letter and it might be an E or an F. The lock says Yale and Towne Mfg Co, Stamford, Conn, USA. There's no patent date on it that I can find.

Sadly the trunk appears to have been painted black at some point in time, and possibly a rusty red before that, as there are some places you can see the orangish-red under the black where it's been scratched. The sides are what looks to be a thick canvas or waterproofed something covered wood (my mom wonders if possibly tar paper, but I'm thinking canvas that was waterproofed in some way) with a leather edging that has also been heavily painted. It is fabric inside and not paper. All the hardware is riveted in, not nailed. The only nails are where the leather is tacked down all along the edges. The metal is all a silver color so I'm thinking steel of some sort. It easily weighs 50lbs and could be more. I haven't tried weighing it, but it's at least what a bag of horse food I tote around is! It takes two people to lift it, and I can't imagine what it would be like full.

I'm guessing there were either shelves or drawers or both in it at some time but those obviously are missing.

My intent is to repair it as best I can and use it to store blankets and quilts in.