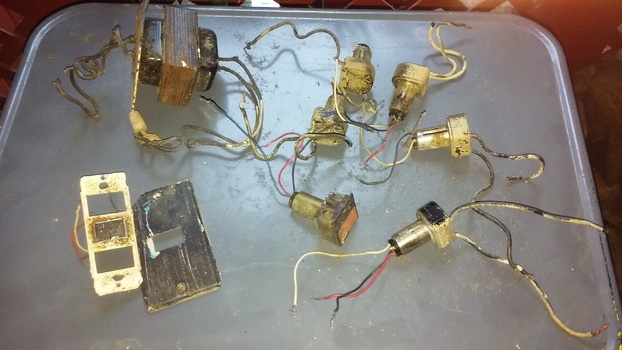 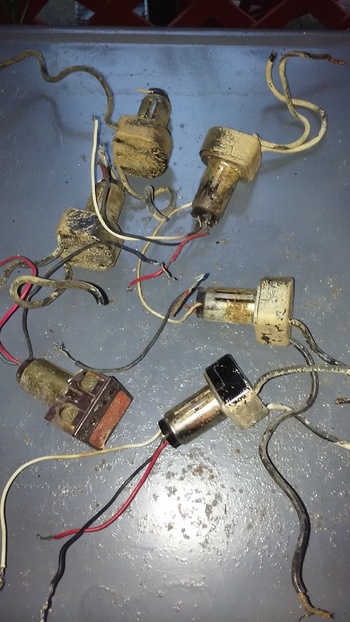 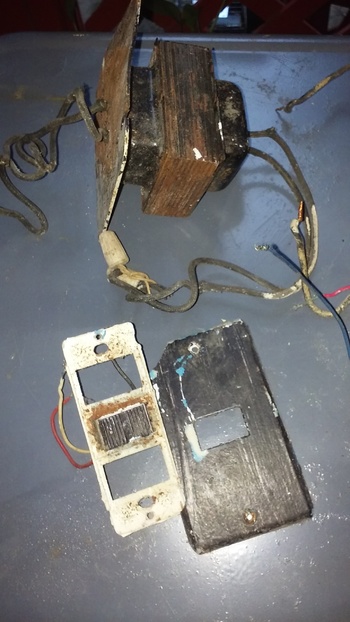 Well, here's the first thing I've posted recently that *didn't* follow me home from Mom and Dad's 'big downsizing'. (back to all that shortly...)

This little pile of grungy electrissical gizmos are *gems* to me -- they're actually parts of an original ca. 1950's "low voltage home lighting control system" as made by GE. For awhile back then, these systems were touted to be 'the latest coming thing' in safe technology (at least, I think?) but didn't turn out to really ever catch on in the homebuilding market. Essentially, the system replaced normal 'toggle' type on/off light switches (hooked up with full 120VAC current on heavy gauge wire, as has continued to be mostly typical to this day) with springloaded 'rocker' type pushbutton switches which were connected to the ceiling lights with light gauge wiring (more like the stuff typically used to connect doorbells or stereo speakers) running on only 24VAC.

Twas true that there's no way one can electrocute themselves by breaking or messing with the insides of one of those wall switches -- but tis also true that the "hazard" of doing so was basically non-existent already (even before they came up with "earth grounds" for everything) and the modern potential for use of such devices in 'home automation systems' hadn't *even* been thought of yet. A 'solution in search of a problem', in the early 1950's. <giggle>

The half-dozen sorta cylindrical things (RH side of first pic) are individual control relays. These were mounted in the ceiling (or wall) electrical boxes immediately behind each light fixture (etc) to be operated, then the light gauge wiring went from each one of these down to a wall switch(es) panel someplace. (another neglected benefit of these systems was that multiple control switches could be hooked to the same light relay much more easily than conventional 120VAC wiring allows)

On the upper LH side (first pic) is the actual transformer that powered the system, it too would be mounted someplace in the attic out of sight/mind...other light gauge wires would have to go from it to every 'control relay' wherever they were. More elaborate systems would have used more than one of these. It simply provides the "non-hazardous" 24V current which is used to trigger the control relays via the light gauge wiring/rocker switches.

And lower LH side is the one (mostly) intact (though muchly painted) single actual rocker switch/wall plate recovered with the rest of the lot. They all came from a house a few doors down from me (which has been unoccupied with roof damage) since before I moved here, but is in recent months being gutted and renovated. [HOORAY, my property value going up!] :-) Last nite after the workers left, I wandered down to check out the latest pile of demolition debris, after it finally occurred to me that, in fact, *most* of the houses in my (1953-4) subdivision were originally equipped with such systems...so mebbe there might be some fun surviving 'bits' in that trash pile...??? And whadda 'ya know -- there WERE!! :-) :-) :-)

My own home was apparently unusual for the neighborhood that it *didn't* come with the system. In fact, I didn't realize the systems even existed myself until encountering them (for the first time) in every *other* house I looked at in this neighborhood before I bought mine. Since then, of course, I've *wished* my house woulda had one, even with the full realization that they're probably a huge PITA to keep correctly operable now, 60+yrs after the fact...? <headdesk><LOL>

For the record, its likely that much of this stuff might not really be any good anymore, esp. considering the source. Still, its fun for me to have these bits...not likely that I'll 'retro-quip' (is that a real term?) my house, but I'm looking fwd to playing with/learning more about 'em anyway...?