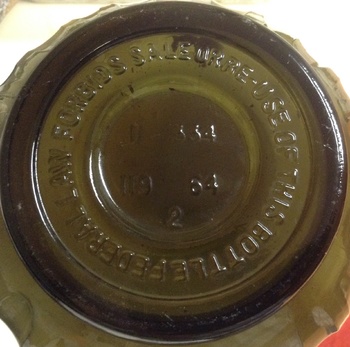 The TV sitcom I Dream of Jeannie aired from 1965 to 1970 and during the filming of the show a total of 6 different hand painted bottles were used as Jeannie's bottle. This was partly because the show started off being filmed in black and white and ended up in color. The bottles the studio used were olive green 1964 Jim Beam Christmas decanters. The last photo is one of the painted bottle used for the show which recently sold. These original decanters are fairly difficult to find and can be pricy. I was lucky enough to find one in a junk store for $2. In the last few years reproduction bottles have been made but they don't have the original writing on the bottom and they aren't olive green.