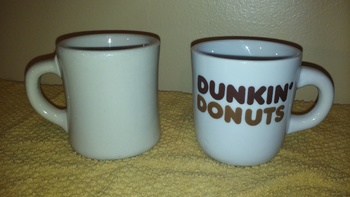 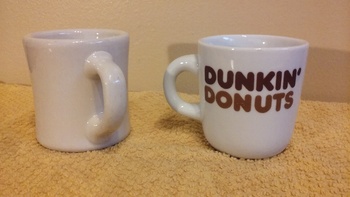 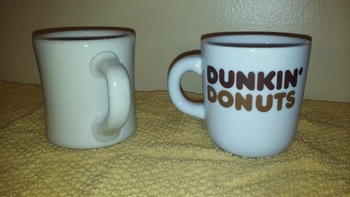 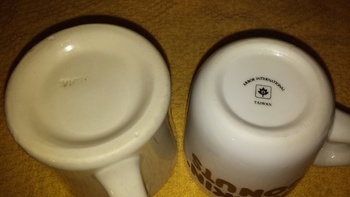 Since DUNKIN' DONUTS was in the news briefly last week (for their announcement that they'll be phasing out 'styrofoam cups') it just seemed appropriate to show my DUNKIN' coffee cup. Likely 1980's (early 90's?) vintage, I found it in a thrift store in the late 90's or so. Its bottom is marked with an "ARBOR INTERNATIONAL" logo and "TAIWAN".

Also shown is a 'generic' white cup, because it was handy when I took the pics. :-) I got it about the same time as the DUNKIN' cup but it is likely older (maybe by a couple of decades?) and is *very heavy/sturdy* for its size -- it is one of those kind of then typical 'diner cups' that could also nearly be used to drive nails -- certainly built to withstand many years worth of duty being bounced in/out/off of bustubs, commercial dishwashers, tile floors, etc. Its only marking is a partial word which might be "VICTORY"...?