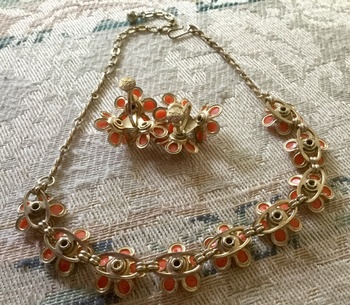 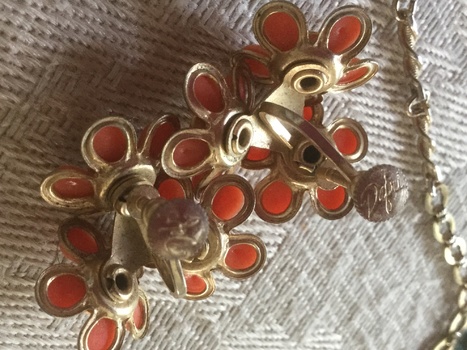 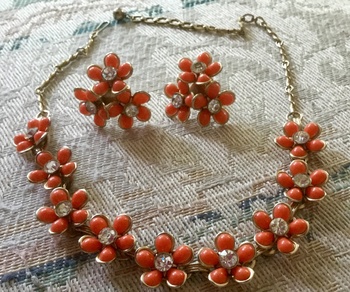 I bought this awhile ago preparing for Spring. Evidently my kick has been on flowers and rhinestones for the season! I have never heard of Dafri before...ever. After doing some research, I found there is not much information out there about the company, nor are there many vintage Dafri pieces available. The ones I did see were quite lovely and appeared well made

I contacted the Toronto Costume Jewelry Club on Facebook. They confirmed the company was only in business in Toronto in the 40’s and 50’s. It is difficult to identify their pieces unless there is a complete set as not all pieces were signed. Sounds familiar. I read they sold exclusively in North America and had a following with the New York socialites. Who knows?

Anyway, it’s a fun piece and will go well on my lime or peachy days!

UPDATE 5/22/2019: I found this bit of information from Vintage Jewels/Antique Haven, LLC (c) on the Rubylane.com Website. “Dafri is a jewelry company out of Toronto, Canada. Very little is known about this company. I got a phone call from a lady named Rita that did some modeling for Dafri company. She was invited to the factory in 1951 when she was 21 years old. She remembers that the company was founded by two gentlemen named Mr. Friedman and Dave Ostrom hence the name Dafri from the first letters of Dave and Frieman thus Dafri. It must have been established in the middle forties as she was there in 1951 and they were going strong. A picture of her modeling a necklace hung in the lobby for many years and yes she is over 80 years old!! “

Per the 1951 and 1954 Canadian Government List of Businesses Employing Over 50 People, their manufacturing facility was located at 107 Richmond Street, SE Toronto, Ontario. The building is still there in what is now called Old Toronto.