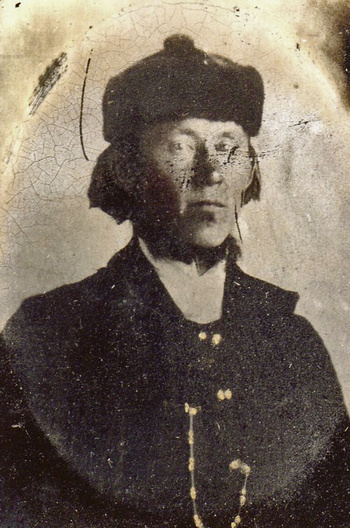 am lookling for someone who might recognize style or purpose of clothing in photo. All info included.This is a photo of my Great Grandfather Welcome B. Davis, taken probably in the late 1860s or early 1870s. Welcome was born in 1833 in Jackson County, Tennessee, the oldest son of Caywood and Rebecca Black Davis. The family migrated northwest to Franklin County, Illinois, in 1833, along with other early settlers of the little community of Mulkeytown. Welcome lived almost all of his life in that community, dying in 1875 of what appears to have been a contagious epidemic of some sort. He was primarily a farmer, but also a partner in a small sawmill for a number of years. In the photo he seems to be wearing something other than the normal clothing of his time and place. The odd cap and the coat suggest some sort of uniform or ceremonial garb. However, there is nothing in his known occupation or association to suggest such an outfit. He was a member of the Mulkeytown Christian Church, the predominant--and in the early years, only--church in the community. Also, there is no known record (or family tradition) of his having served in the Civil War. Historians in Southern Illinois and in the Smithsonian's history museum, familiar with the pioneer culture of the region, have not been able to identify his outfit. Accordingly, I am hoping that someone seeing this photo may be able to identify his apparel. Thank you.