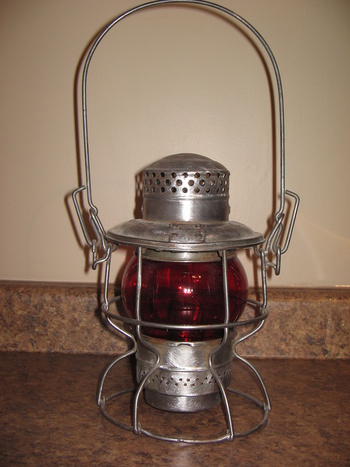 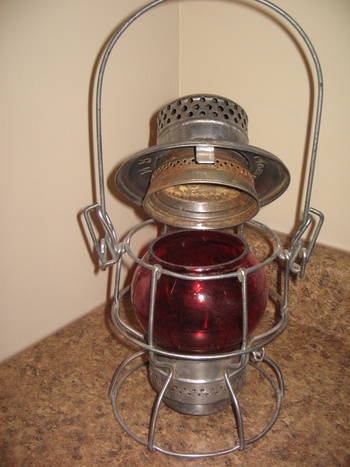 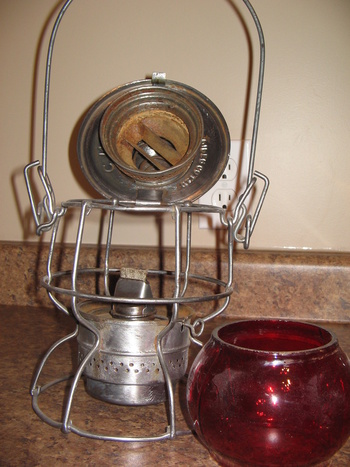 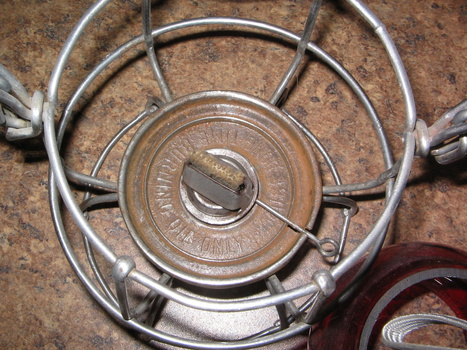 I have this lantern hanging in my basement. My father gave it to me once they moved, downsizing from a house to an apartment. My childhood neighbour worked for the Canadian National Railway (CNR). He is now long retired. He had this lantern hanging in his garage and was going to throw it in the garbage, when my father said that he would take it for a decorator piece. My father hung it in his basement for years, until it was passed on to me when they moved.

Although I have never lit it, the lantern appears to be fully operational, with a little lamp oil, with the original wick mechanism. The aluminum lid is stamped by the Hirman L. Piper Co. Ltd. (manufacturer) with the CNR stamp on the opposite side of the lid.

It would seem that this lantern was used at one point in time, but the cloth wick looks like it has either been replaced or briefly lit so as to not alter it's composition. There is somee rust on the inside of the lid.

The glass globe is actually red glass (and NOT glass that been given a red coating - the type that eventually peals) with no cracks or chips.

I am a big fan of American Pickers (despite the fact that I am Canadian and am turning on my own boys --- Canadian Pickers) and watch it all the time. In one episode I saw Mike looking at a number of railway lanterns hanging in a person's shed and heard him say that he looked for lanterns with the railway stamp on them and that some of them could be worth something substantial. This perked my interest in finding out what the one I have hanging in my basement is worth.

I look forward to hearing back from you.