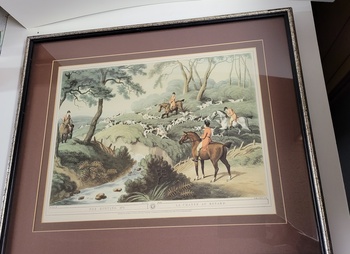 Picked this up today for $10. Has a great frame and matting. Its a print of the original 1808 English engraving. Scene depicts a Fox hunt. There seems to be surprising amount of hounds in use.

SAMUEL HOWITT
"Samuel Howitt, "genius, artist, sportsman", concentrated his considerable artistic talents on picturing scenes of horse-racing and hunting in all its aspects. Born in Nottinghamshire, England, Howitt was largely self-taught ,"although he must have been helped by his companions George Morland, Rowlandson and John Raphael Smith. Howitt's watercolours of hunting, shooting and racing have delightful spontaneity. An enthusiastic sportsman himself, he had sufficient family money to paint at first only for his own and his friends' pleasure. However, this fortune was quickly dissipated and Howitt moved to London... [He made a living], partly by etching at which he was extremely skilled. As an artist he was prolific. more than 150 of his designs were published in The Sporting Magazine. He illustrated Beckford's Thoughts on Hunting, and other books, including Orme's Collection of British Field Sports."