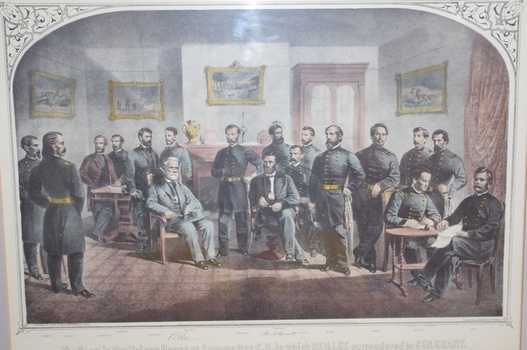 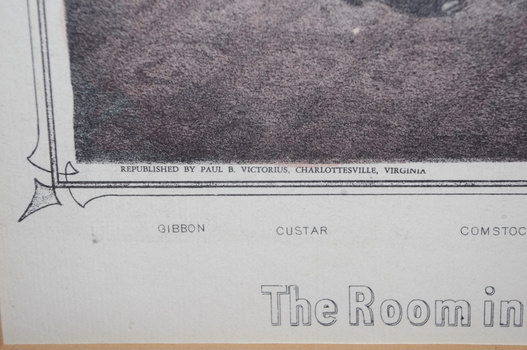 I purchased this at an estate sale around ten years ago. It's a re-print of a print titled 'THE ROOM IN THE MCLEAN HOUSE, AT APPOMATTOX C.H., IN WHICH GEN. LEE SURRENDERED TO GEN. GRANT'.
After some research I've discovered that this is a re-print of the original which was commissioned my Mr Mclean so he could recoup some cash after the surrender. There is a copy of the original in the Smithsonian. The original isn't hand colored like this re-print. The re-print is by Paul B. Victorius, of Charlottesville, Va. I can find nothing regarding the value of this re-print.
Note... Gen. Lee wan accompanied by just one officer at the surrender. This print shows two. In fact neither of these two officers was with him at the surrender. The two officers shown are Gen. Walter Taylor and Gen. Curtis Lee. Taken from a photograph my Matthew Brady taken after the surrender at Lee's residence in Richmond. At the surrender he was accompanied by Col. Charles. Venable.
Also note the incorrect spelling of Gen. Custer, as CUSTAR!