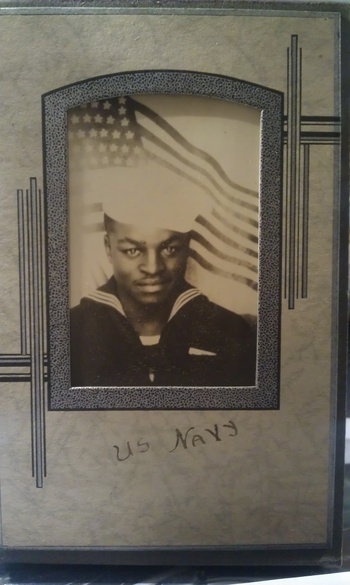 bought a lot of WWII paper items and this was in it. WWII Photo.

from wikipedia
The United States Navy grew rapidly in World War II (1941-45), and played the central role in the war against Japan, and a major role in the wars against Germany and Italy.

The U.S. Navy grew into a formidable force in the years prior to World War II, with battleship production being restarted in 1937, commencing with the USS North Carolina (BB-55). Though ultimately unsuccessful, Japan attempted to allay this strategic threat with the 1941 surprise attack on Pearl Harbor. Following American entry into the war, the U.S. Navy grew tremendously as the United States was faced with a two-front war on the seas. It achieved notable acclaim in the Pacific Theater, where it was instrumental to the Allies' successful "island hopping" campaign.[1] The U.S. Navy fought six great battles with the Imperial Japanese Navy (IJN): the Attack on Pearl Harbor, Battle of the Coral Sea, the Battle of Midway, the Battle of the Philippine Sea, the Battle of Leyte Gulf, and the Battle of Okinawa.[2]