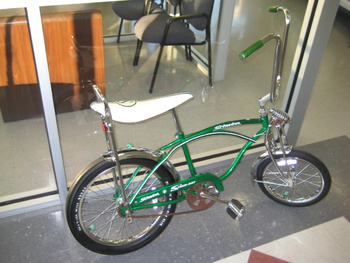 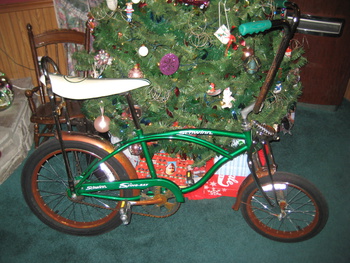 This is my 2007 Schwinn "Black Friday Krate" StingRay. These bikes were only $88 at Wal-Mart on Friday Nov. 25th 2007. "Black Friday". The Orange County Chopper also made by Schwinn stole its glory and had been on the market and everybody wanted it instead of the StingRay. These bikes have since became collectable and go for un-heard of money. They made 3 colors Green, Blue, & Black. The Blue is the least color made. This Bike as you see from the last picture was in poor shape !! The Chinese Chrome will go bad at the sight of water....so we bought new wheels, handlebars, & decals, but the fendors they have not re-produced for this bike. The ones that are repop for the other Schwinns have to be altered. We had to buy a original Schwinn Front fendor and the back fendor was a dove tail off a roadmaster and we had to alter it to fit. Thanks for looking !