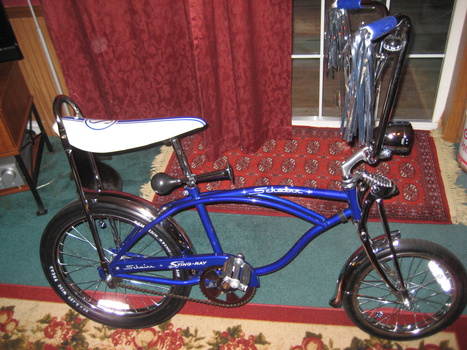 This is my Blue 2007 Schwinn "Black Friday Krate" StingRay. This Bike had never been riddin when I got it in Dec. 2010. I added the headlight, streamers, compass, ipod holder and speaker (so I have some tunes while ridding)horn, & dice valve stem caps. These bikes were only $88 at Wal-Mart on Friday Nov. 25th 2007. "Black Friday". The Orange County Chopper also made by Schwinn stole its glory and had been on the market and everybody wanted it instead of the StingRay. These bikes have since became collectable and go for un-heard of money. They made 3 colors Green, Blue, & Black. The Blue is the least color made.