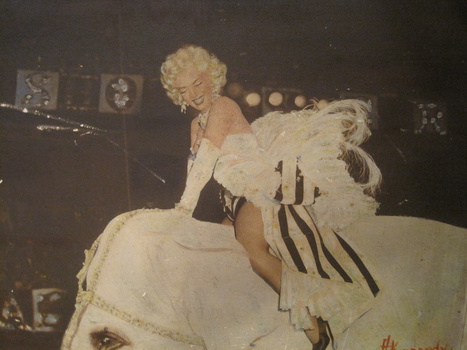 I'm so happy to have been introduced to Collector's Weekly and was wondering if anyone might be familiar with a framed (print?) that I own. I've attached a photo of it: Marilyn Monroe on a circus elephant during her appearance in 1955 at Madison Square Garden. I have been told by somone who saw a photo of it that it is a "print" but nothing else. I was hoping someone might be more familiar with it or the individual who signed it. I purchased it approx. in the late '70's, early 80's in Queens, NY and have wondered about it ever since. I just love it but would like to know something about it, if anyone could help. Although a "print", it appears to have been painted(?) in spots as I can feel a "texture" to it and is signed by, I believe the first initial to be an H. H. Kennedy. It is framed and its size is approx. 14" x 17".
Thanks very much. I look forward to reading about the beautiful items others have shown on Collector's Weekly.