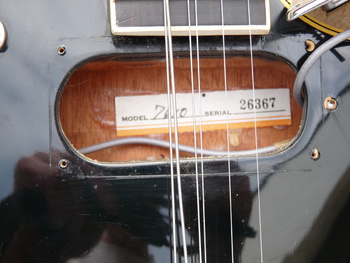 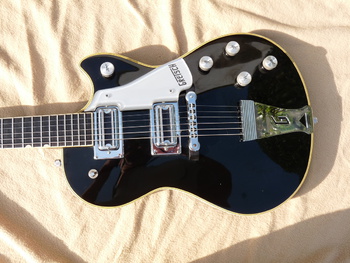 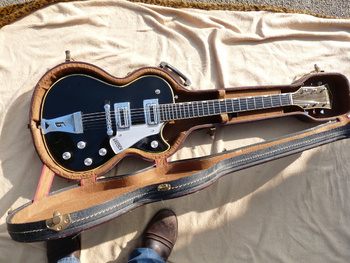 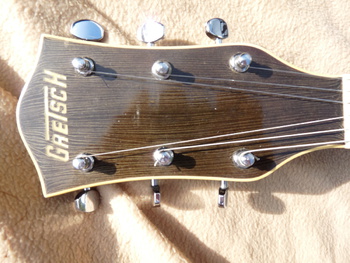 Ok, so here's the conundrum....I bought this guitar from a small-time dealer over 30 years ago...I loved the look of it, and it sounded just great and played sweet as honey. I knew it was OLD, the case smelt of age, and I was told that it was brought in by a guy who had found it in the loft of his new home, didn't play, and wanted the cash. It had been lost in time, but I couldn't find a serial number, or another guitar like it (no Internet back then).
The dealer had had it in his stock for over a year (everyone was into Strats, Telecasters and Les Pauls at the time), so I got a good deal on it.
Then I got married, had kids, and stopped playing...28 years ago.
Recently divorced and with time on my hands, I started playing acoustic again...it passes the hours and relaxes the mind...and doesn't tend to offend the neighbours.
I bought a small practice amp having decided to clean up and re-string the Gretsch. Lifting the top pick-up I discovered a totally non-standard label identifying the serial number (printed) and model number (hand written)....BUT....according to all the info I can gather, the serial number 26367 is 1957, but the model number 7610 (Roc Jet) wasn't manufactured / made until 1971-1975.... ????

Anyone out there able to help me out here??
is this a prototype, custom build, or did Gretsch actually manufacture the Roc Jet in 1957?? I am - so far - baffled and intrigued