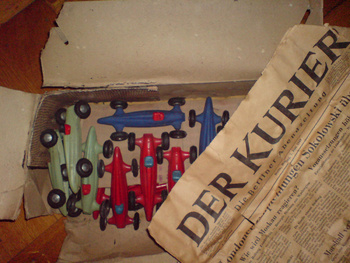 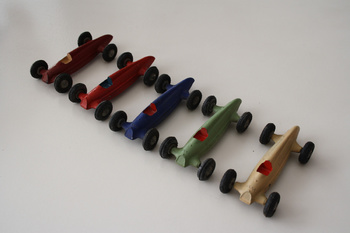 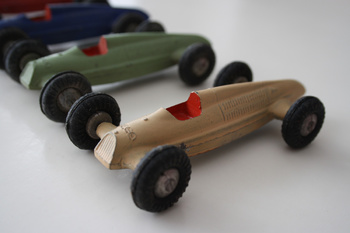 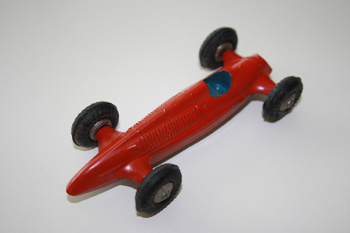 Recently I aquired a collection of vintage, identical model racing cars, in five different color combinations. The models were retrieved by a friend over twenty years ago from a house in Frankfurt in Germany. The cars are all unused, packed together in numbers of some twenty to thirty cars, still sitting in over sixty-year-old cardboard boxes. Inside the boxes we found some pages from the 1948 Berlin newspaper Der Kurier, as well as some technical German norm sheets from 1944, used as packaging material. The boxes were sent from one Friedrich Wilhelm Krebs in Berlin to ‘Fraulein’ Tilly Krebs in the ‘American Zone’ of Frankfurt, presumably in 1948. And that is where they stayed; the models were never unwrapped, sold, or used.

The models are of the famous Auto-Union racing car, designed by Ferdinand Porsche’s design bureau, which made its debut in 1934 – most notably of the 1934 Auto-Union Type A ‘long-tail’ model. The racing cars by Auto-Union as well as their competitors by Mercedes-Benz – known as the ‘silver arrows’ – were the flagships of Nazi-Germany and delivered fierce combat with Bugatti, Alfa Romeo and Maserati racing cars on the European racing circuits up until the outbreak of World War Two. The Auto-Union racing cars clearly had their heyday in pre-war Nazi-Germany – but when where these models made? They must be either from pre-war old stock, or of early post-war production, presumably using pre-war casting molds.

The models appear to be in standard 1:43 scale, in metal ‘zamac’ die cast with rubber tires. The holes for the wheel axes must have been drilled after casting. The models were made in five different color combinations: off-white with red seat, light green with red seat, red with blue seat, dark red with off-white seat, and blue with red seat. The models have no separate bottom-plate, and there is no mention of a manufacturer. The underside of the driver’s seat only contains the number ‘B 1300’ and a tiny logo with a letter ‘B’ in the centre, presumably reading ‘K B G’ (this could stand for a KG ‘Kommanditgesellschaft’, a kind of Limited Partnership, from Berlin) or or ‘K B K’ (one source mentions Kurt Becker KG as the possible manufacturer).

As soon as more information has been gathered about the historical background and signifigance of these models they will be offered for sale, either individually or in sets of 5 cars – one of each color. For more information please contact me through the contact form at: http://www.ganz-volkswagen.org/contact.htm