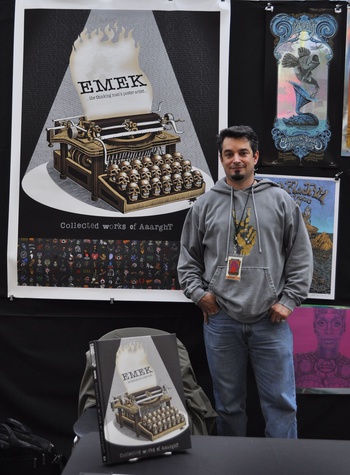 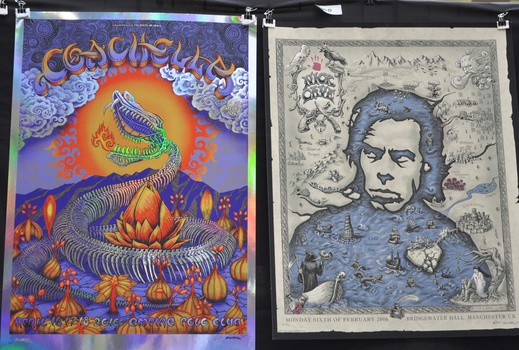 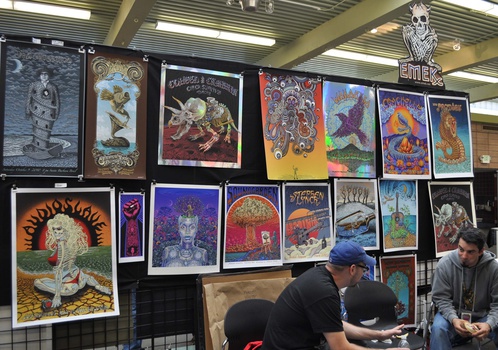 Emek, who is one of the most successful contemporary rock-poster artists in the world, was at The Rock Poster Society's Festival of Rock Posters in Golden Gate Park on 10/9/10. The Pacific Northwest resident was in town to debut his new book, "Collected Works of Aaarght" and show off his latest stuff.

I've watched Emek at a couple of TRPS shows now, and I'm always amazed at how patient and focused he is, as people come up to him, all day long, to have their posters doodled, which he does for free, one after another. Some collectors request these pencil or pen doodles at the bottoms of their Emek posters because they simply love the guy's work so much—they want their poster to be special. Others, no doubt, are hoping Emek's doodles will add to the poster's value when they flip them on eBay. As an outside observer, I'm pretty sure I can tell who's who, and I wouldn't fault Emek for being a tad less gracious to those who would take advantage of his good will. But if Emek knows who's who, too, he isn't letting on.

One of my favorite new posters by Emek is for a Van Morrison show in Santa Barbara. You can see it in the upper-left corner of the far-right photo. Since the date of the Van Morrison show was also 10/9/10, the poster was not for sale yet.

Just about everything else was, though. In fact, at the end of the show, as the artists and dealers were packing up their stuff to head home, the canvas banner advertising his book (see photo at left) was purchased by a delighted collector. Emek removed it from its grid, laid it out on a table, and then proceeded to sign and doodle on it, as he had been doing with a smile all day long.