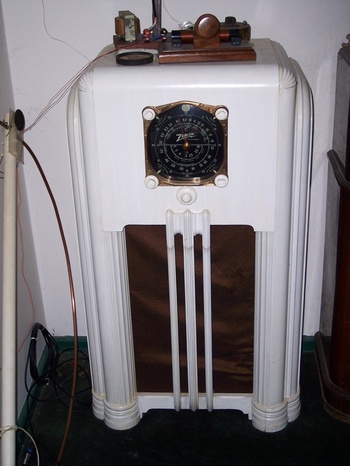 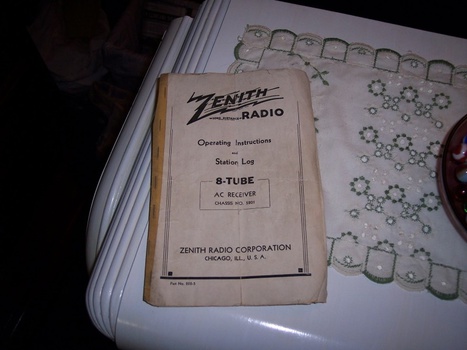 Talk about a remarkable find! My wife and I found this set in a junk store called Nazam's located on Dorchester Road West of Leeds Avenue in North Charleston and believe me, it looked nothing like this when we bought it for 75.00! Like an idiot, I was not thinking of course when I set out to restore this baby. For some stupid reason I did not take any pictures of the set before I started working on it. This picture was taken after the cabinet was stripped and restained. The sad thing about this radio is the original color was Ivory which is a much sought after set by collectors. I heard through a newsgroup that one sold in North Carolina at an auction for a little over seven hundred dollars. Somewhere along the line some genious decided to paint this set with a enamal white paint, which of course, ruined the original finish. Let me tell you, I had a very hard time removing this horrid finish; whoever did it put several layers on it, and painted everything including the brass escutcheon.
I knew for sure that it was an original ivory set because you could see traces of the original color on the inside of the cabinet. I also learned from some guys in an antique radio newsgroup that I subscribe to about some numbers and details on the chasis that would help me confirm that this was indeed an original ivory set. Apparently, these sets were not in production for very long and to tell you the truth, I have not ever seen another one in all my travels. It took me roughly about a year to strip the cabinet and refinish it, of course they dont make that color anymore (at least I could not find it anywhere) so I used a white pickling stain from Lowes which was as close to the original color as I could get. It took several coats to bring the set out, and in the end, I put a couple of layers of shellac on it which turned out really nice.

The chasis was in pretty good condition and it cleaned up well. I did find a couple of bad tubes so I decided to go ahead and completely re-tube the set. I also went ahead and replaced all the paper caps and electrolytics which did wonders for the radio. The only trouble that I had was the camdown resistor decided to crap out on me. This happened after the re-cap and re-tube plus alignment. Talk about being really stressed out! I did not have a clue how to fix this problem so I had to get help from a good friend who knows a lot more about fixing radios than I do . He went through my junkbox and found all the correct value high voltage resistors and cobbed together a new camdown resistor. Well, it looked ugly but by golly it worked! Thank goodness it was under the chassis so you don't see it! Once it was installed and the old camdown removed, the set sprang to life and has been playing every since. It is one of my favorite sets and I enjoy it very much.