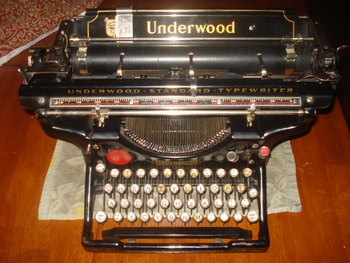 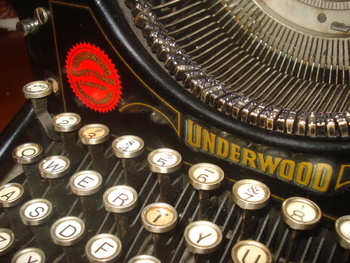 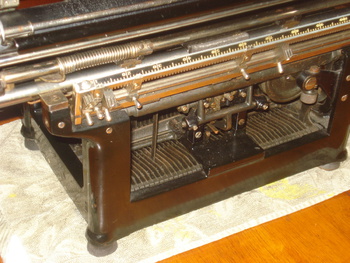 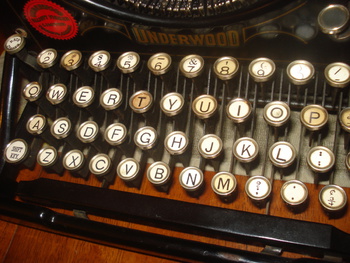 This is my '22 Underwood nr.3 Desktop typewriter in excellent condition. This machines is getting close to being mint because it is just in such a wonderfull condition. I haven't seen i typewriter with such a good details as this one. This machine is just in wonderfull shape. It has a little paintloss in the corners by the spacebar but that is just a centimeter by a centimiter on both sides. The decails are in amazing condition. The keys are also in great shape. The "T' and another key, i can't remember have became a bit damp and the result of that is yellow keys. But not that bad. I have some yellow keys on other machines too. But that is because they are with keys. The glass on all of them are intact. The outlining of the keys are still very thin,
(Typewriter hammers are stamps and when they get used a lot they wear so the outlining gets thicker.)
The inside is very clean, the feet are in good shape. Some have taken the shape of a pudding and that is normal of carrying the heavy weight for the past 90 years. The machine is made in Canada (Elliot Fisher, Toronto Canada it says). The metal and chrome parts are beautiful. There was a little bit of liquid rust in the type key basket but i got that out. No other rust in any other part of the machine. The platen has on one side a funny pattern that has not been cause by keys. I don't know how that is caused. But it doesn't affect the typing at all.
I still have the original carriage belt on the machine which i had to replace on two of my Underwoods because they just snapped the first time i touched one of the keys after been sitting in a garage or attic for such a long time.
I bought this machine from a Dutch Gentlemen that was selling it for $50,-. It came with the original cover but it was so old it was just falling to pieces. I still have it in a plastic bag but i was affraid that it might fall apart when i took it out. The typewriter itself was in non-working condition when i found it. Nothing was broken but the dust and dirt had collected in the typewriter over the years of sitting on a desk of the gentlemen and that got the carriage stuck. It was not moveable. Also the keys and the spacebar meganism weren't working just because of the dust and dirt. One thing that had to be replaced was the screw that connected the carriage release leaver to the carriage rail. If you know something about typewriters you understand probably this typewriter talk. So i fixed that, cleaned it up (I spend over a week cleaning this thorougly) and there you have it. A perfect Underwood nr.3 typewriter.

Some of the features are:

*A two colour colour selector, also has a stencil option
*A ribbon direction switch. Very old fashion on the side.
*Carriage lock one side
*Tabulator and manual tab settings on the back
*Carriage release
*Paper release
*Margin release
*Carriage belt spring tension button (on the back)
*1 - 2 - 3 space controls.
etc.

Yes, this is truly a wonderfull machine and i would advice this to any writer. They use regular ribbons, require minimun maintanance and just never break . (I don't know if i spelled that right).