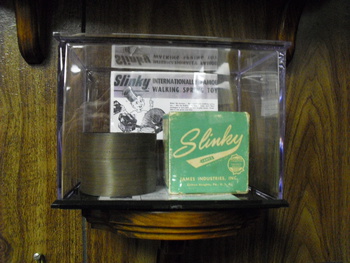 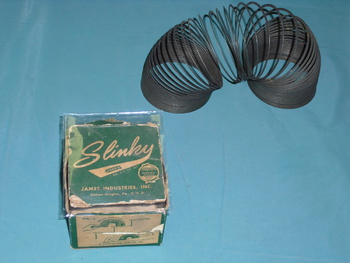 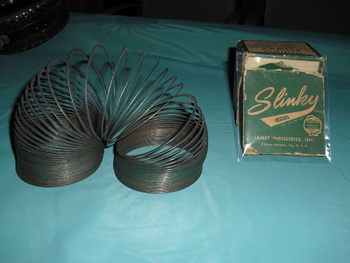 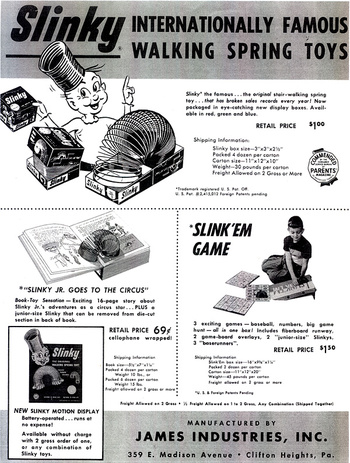 The slinky was origianly made in Clifton Heights Pa. Richard and Betty James made them. He took 400 hundred to Gimbels and asked if he could sell them. It was around Christmas Time. He sold all 400 in 90 minutes. After many years and success, Richard hooked up with a religious group leaving the USA. He gave Betty a choice to go with him or take over and run the company. She choose to stay, and slinky was named to the toy hall of fame as well as Betty James. Slinky is now manufactured in Holidaysburg Pa. and was bought by Poof industries. Check out their web site on WWW.poof-slinky and check out history and the slinky's song. Thanks for looking.

ps. An Act designating the Slinky as the official toy of the Commonwealth of Pennsylvania was proposed by State Representative Richard Geist in 2001 (but not enacted). State Symbols USA encourages Pennsylvania students to rally around this symbol and make it official!

The U.S. Postal Service issued a Slinky postage stamp in 1999. The Slinky was inducted into the National Toy Hall of Fame in 2000 . The Slinky also appears on the Toy Industry Association's 2003 "Century of Toys List" (the 20th century's top 100 most memorable and creative toys).