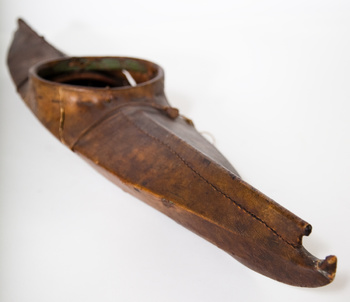 (1st pic) a 32" model of an Alaskan Umiak, a walrus hide-covered open sea-going craft used for transport and sometimes whaling; this one dates to ca. 1875, and once belonged to a sea captain who often sailed from San Francisco to Alaska during the 'gold rush' days. (2nd pic) a 24", Pacific Eskimo 3-hole baidarka showing Siberian influence in its bifurcated bow; from Alaska, dating to ca. 1900, previously in a western US museum. (3rd pic) a 32" sealskin kayak from the Norton Sound area of Alaska, dating to ca. 1880; still has its original woven reed mat inside the cockpit. (4th pic) shows a 20" caribou hide covered model kayak of Caribou Indian origin, from the central arctic of Canada, west of Hudson Bay. Such kayaks are used in the hunting of caribou as they ford the rivers during their annual migrations. This one likely dates to ca. 1950. 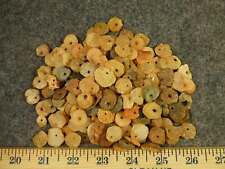 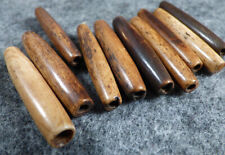