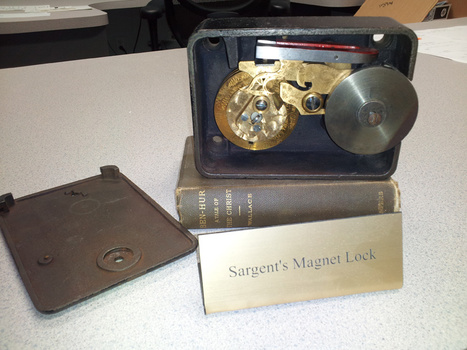 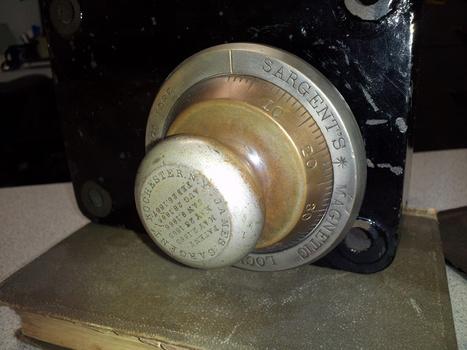 When you collect certain types of things, it is good to have friends who share the interest with you. Knowing another’s interest, and they knowing yours, allows you both to look out for items that will strike one, or both of your fancies. Two heads are better than one, so to speak. Ok, I know that is too philosophical and is really cliché but I feel the need to give credit to one particular friend of mine.

I saw a very old, rare, and way cool combination safe lock on an auction (not Ebay). Knowing my friend had some locks like it, I asked him about it. It looked to be in nice shape from the pictures, but I wanted to know what it might be worth. I really wanted this lock and planned to wait until near the end of the auction to bid on it.

As it turned out, the evening the auction was to end another friend of mine asked me to help him on a job opening a safe. I should pause here a moment to say that I open safes legally, I’ve never been in prison, and no I don’t want to go into business with you. Anyway, I’m working on this safe and I get a text message from my collector friend asking if I was bidding. Geeze, was it that late? I sent him a text and told him that I probably would not be able to bid on the lock because I was tied up away from a computer. He asked how much I wanted to spend. I gave him a price and he started bidding for me. The site of this auction is not like Ebay. You place a bid and that is your bid. The auction is over at a certain time or ten minutes after the last bid, whichever is later. So my friend bids, someone else bids, my friend bids, someone else bids, etc. in five or ten dollar increments. The price got up to the amount I told my friend, so he upped his bid fifty dollars and the other guy was heard from no more. He then sent me a text and let me know the price. He would take the lock if I really didn’t want to spend that much. I didn’t have to think very long. I wanted the lock.

When the lock arrived, we both were very pleased. Especially me, since it was now mine. Here is my pride and joy. A Sargent’s Magnetic lock. The first picture is of the lock with its back cover removed. I took it down from the shelf where it usually sits above my desk at my office for the picture, but that is the way it normally is displayed. On top of a copy of “Ben Hur” with the cover off and a sign my friend gave me in front of it. The second picture is a close up of the dial and dial ring. The dial lists five patent dates from May 2, 1865 to February 26, 1867, so it was very likely manufactured in the late 1800’s. The Sargent’s Magnetic lock was a mid-nineteenth century bank lock most notable for its resistance to manipulation. That is, figuring out the combination by fiddling with the dial. There is a magnet that holds a lever above the wheels. The magnet releases the lever at a certain point in the rotation of the dial. If the combination has been dialed correctly, the lock opens. If not, the lever is bumped up and held by the magnet again. The magnets would lose their magnetism over the years and this lock underwent some changes. It later became the Sargent’s Automatic lock where an automatic mechanism replaced the magnet. The magnet in my lock is not magnetic at all. The round silver thing you see to the right of the lock case is the lock’s bolt. It rotates when the lock is opened and a cutout you can’t see in the picture is revealed allowing the safe or vault door’s boltwork to move thus unlocking the door.

My Sargent’s Magnetic is one of the smaller ones with a cast iron case. There are larger versions with even more ornamental things to see inside. Many of these locks have bronze cases. Mine being smaller and with a cast iron case was probably from a safe rather than a bank vault. That also means it is not as valuable. That’s ok with me since I probably wouldn’t have been able to afford it if it were. One last thing about my Sargent’s Magnetic is that it says the name of the lock on the dial ring. You can see in the second picture “SARGENT’S MAGNETIC” around the right side of the dial ring. This appears to be very rare. My collector friend has never seen that on another Sargent’s Magnetic, nor have a couple of friends he has mentioned this to. I’m really liking this lock. Can you tell?