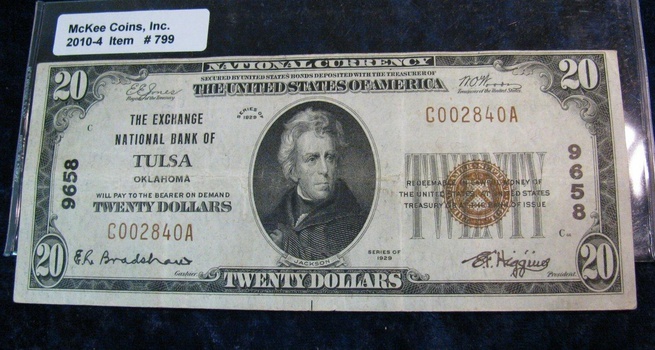 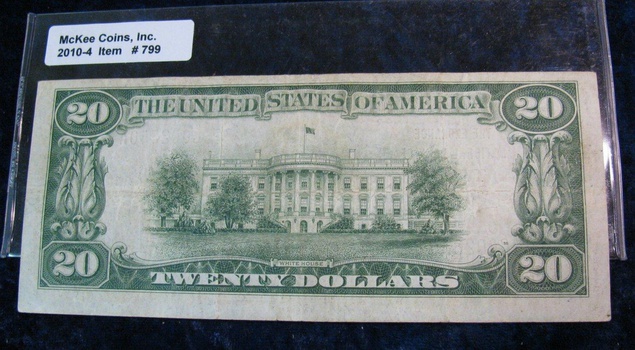 Extremely Rare and unknown to Hickman & Oakes or Don Kelly.

Only Type Ones are listed.

The bank represented the pinnacle of Tulsa success in the 1930s oil boom, engaging in international business and maintaining a board of rich and powerful men.

Unknown to investors, oilmen including Harry Sinclair and J.A. Chapman had been sinking millions of their personal wealth into the bank to keep it open. In 1933, it reorganized as the National Bank of Tulsa with $4 million from the Reconstruction Finance Corp. and an equal amount from stocks and stockholders.

But within a month, the bank was forced into receivership. The Exchange Trust, a subsidiary of the bank, was to be liquidated. The institutions had lost about $5 million in less than four years.

A special prosecutor brought charges against 28 of Tulsa's most prominent residents, accusing them of embezzling trust funds from "widows and orphans and helpless incompetents."

The case was thrown out of court, and the board of directors, who had put about $18 million of their money into the bank to save it, were hailed as heroes by Tulsans.

The National Bank of Tulsa continued, becoming the state's largest financial institution. It is known today as Bank of Oklahoma.

SEE BANK OF OKLAHOMA WRITE UP NEXT PAGE

* In 1926, and during the great depression,
L.R. Kershaw a Muskogee, Oklahoma
business man became the receiver of 13
National Banks. These banks had failed because
of the depression. The Exchange National Bank
of Tulsa, Oklahoma was one of those banks.

* By 1960 National Bank of Tulsa was known as
the "oil bank of America," and oil loans were
instrumental in the rise of the First National
Bank of Oklahoma as the largest bank in
the state.

* February 10, 1992, the National Bank of
Tulsa changed its name to Bank of Oklahoma,
National Association.
NBT (National Bank of Tulsa) Building
aka Exchange National Bank
(#80 on site map)
Location: 320 S. Boston Ave.
(Downtown)
Architect: George Winkler
Completed: 1917, expanded 1929
Style:
National Register Listed: No
The building at 320 S. Boston was originally the home of the Exchange National Bank. Completed in 1917, the building stood ten stories tall and was the largest bank in Oklahoma.
At right, the Exchange National Bank, looking southwest toward the corner of 3rd and Boston.
Below, the expanded building viewed from the same perspective.
Amidst a downtown building frenzy in 1929, the bank was expanded and became known as the National Bank of Tulsa.
• The top of the tower was designed as a zeppelin mooring.
• The engraving of the original name is still visible on the building's north side.
• During the 1960's, colored floodlights were reflected off the tower, with different colors signifying various weather conditions.

AND THAT”S THE REST OF THE STORY

US National Bank Notes
See all