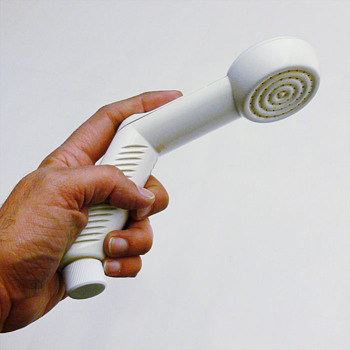 Another weird thing designed by Ricard in my collection... a shower head! This ne was designed for the Tatay plastics company, which is mostly dedicated to the making of bathroom complements and plastic containers. The model is called Teléfono, anyone can see why LOL

Why do I have this other Ricard item is also funny. I know live in what once was my father's surgery, but before I did, my brother and his wife lived there for a year back in 1997 before they could get their own flat. The house was built in 1970 and had all thge original fittings. One of the things my sister-in-law did was changing the shower head. And years after (2001) when I moved there I gave no great importance to it, until again I got this book about Ricard and found out the inmense amount of his designs I had used or got during my life. And this one was in my own place! (I seem to run into his designs all the time: when I first went to Carlos's place in Valencia I couldn't believe what I saw: a Ricard's kitchen sink from the 1980s!)

This design is another great one I have to say... you can see at the pic how comfy it is to hold.