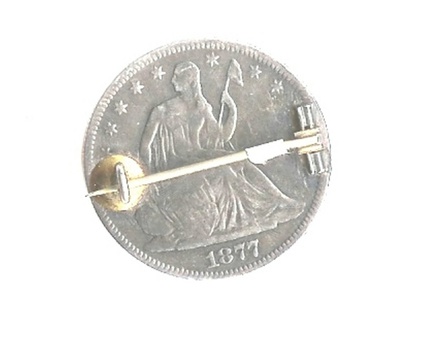 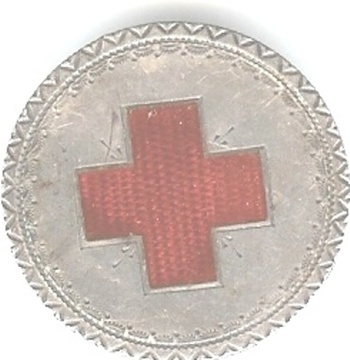 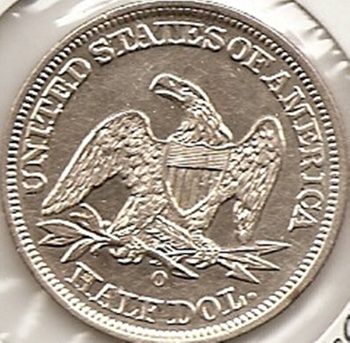 I volunteer at a Hospice Thrift Shoppe - I am trying to find out a little about this unusual offering.

Thanks to all of you who helped me with the research - as a result I am expanding this and have increased the clarity of the pictures. If you save them to your computer and then zoom in on them - you will have an excellent assessment of the quality of this pin.

It is ostensibly a Red Cross pin - the foundation is identical to the 1877 Seated Liberty 50 cent piece. However the reverse side is completely different from the coin - starting with the rim -it flows into a fancy interior border and is highlighted by a carefully inserted glass (?) red cross- with more engraved art work just adjacent to each of the middle sections of the red cross. You can now easily compare the two in the pictures above.

One theory is that the original coin was used and the surface of the reverse side completely sanded. It would appear however that the coin has lost none of its original thickness and the new ridge is completely different. . I will verify this with a coin dealer later this week - if there is a difference - then I believe we have the answer to how it was created

The interesting point is that the design surrounding the RED CROSS is in my opinion very feminine -as if created for a female - which would make perfect sense given Clara Barton's immense impact on the creation of the American Red Cross.

It seems very obvious this is one molded piece - and not two pieces glued or soldered together. I will, however, have a jeweler verify this - but I have looked at it under very intense magnification.

In short, this is a first class artisan product - make for a specific purpose with care and apparently with some purpose and meaning to the year 1877.

Here are some dates and events that are significant to both the INTERNATIONAL RED CROSS and the AMERICAN RED CROSS.

Two of them occurred in 1877 - one involves Clara Barton. Certainly, 1877 was an important date for Clara Barton as she was actively involved in the promotion of the RED CROSS movement.

The International Red Cross was founded in Switzerland as a result of the Geneva Convention of 1864, to care for the sick and wounded in war, and to secure the neutrality of nurse's hospitals, etc. It was and is active also in relieving suffering occasioned by pestilence, floods, fire and other calamities.

August 8, 1864 First Geneva Convention issued protecting the war wounded and identifying the red cross on a white field as a neutral protective emblem.

1877 - Clara Barton was so inspired by the efforts and triumphs of the volunteers of the International Red Cross that she took this movement all the way to President Rutherford B. Hayes in 1877 where it was unfortunately rejected

The Ottoman Empire balked at the RED CROSS symbol as being too much like the cross of the Crusades. They petitioned that the RED CRESCENT be used to identify their medical personnel, and facilities.

The International Red Cross Committee asked the Russian Red Cross to obtain the Russian government's consent to the Turkish proposal for the duration of the war. On 24 May 1877 the Tsar declared that he was ready to recognize the inviolability of Turkish field hospitals; the Ottoman Empire agreed to reciprocate in June 1877, after difficult negotiations.

The Committee's main aim in adopting this stance was to defend the wounded in the conflict between Russia and the Ottoman Empire.

Clara Barton concentrated on educating the public and garnering support for an American society of the Red Cross. In 1878 -She wrote and distributed the pamphlet, "The Red Cross of the Geneva Convention. What It Is". She met with President Rutherford B. Hayes to inform him about the Red Cross and enlisted the aid of friends to help publicize the organization.

On March 1,, 1881, President Chester A. Arthur signed the Treaty of Geneva. Following unanimous ratification by the Senate, America joined the International Red Cross.

May 21, 1881
The American Association of the Red Cross was formed. Miss Barton was elected president at a meeting held June 9 in Washington, DC.

If you have ever seen one of these pins or have any insights - guesses or whatever that might shed light on the origin and purpose of this most interesting piece - it would be greatly appreciated.