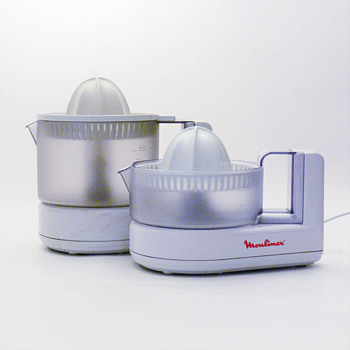 After a 50 years career as a designer, Ricard has worked not only for Spanish companies. He also worked for European companies such as Moulinex, Gaggia, Pierre Junod watches... (and he just designed -at age 83- the olympic baton that was given to the Brasilian Olympic Committee at the of the 2012 London games: http://www.flickr.com/photos/fortstudio/7743178302/ - he also designed the Olympic torch for the Barcelona 1992 games_ http://especiales.elheraldo.hn/juegos_olimpicos/paginas/barcelona.html).

Well, one of the designs he made for Moulinex is this juicer, that comes in two sizes.