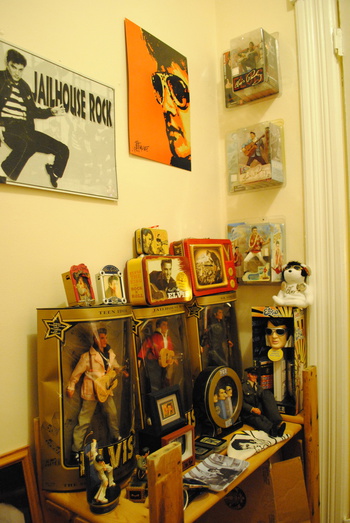 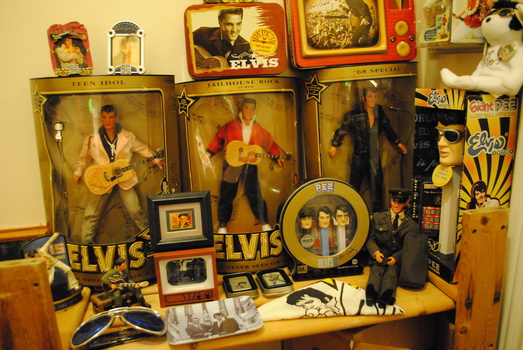 This is most of my Elvis memorabilia collection, with the exception of books, movies, CDs, 8 tracks, cassettes, records, some card decks, and my velvet painting. There is the complete 1993 doll series still in the boxes, "The Sun Never Sets on a Legend" including Teen Idol, Jailhouse Rock, and '68 Comeback Special. I have three of the McFarlane figures, also still in the boxes, '68 Comeback Special, First Recording at Sun Studios, and Blue Hawaii. The collectors Pez dispenser set including 1958 Army Draft, 1968 Comeback Special, and 1973 Aloha From Hawaii. There's a special framed version of the 1993 stamp, several singing Christmas ornaments, a "loose" 1958 Army Draft doll, a giant 1970's singing Pez dispenser, a Beanie Baby, some vintage pins, three lunch boxes of varying sizes, an Elvis and Nixon tray, an Elvis on television model, two tin signs, a scarf signed by an impersonator in Vegas, two Zippo lighters, and some Vegas era style sunglasses. Although the majority of this stuff isn't vintage, I've loved Elvis my whole life and I love having these things around me.