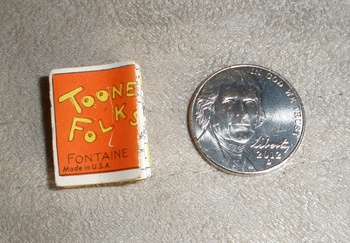 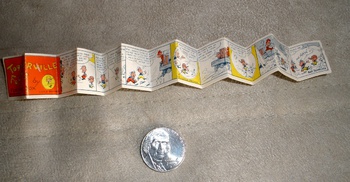 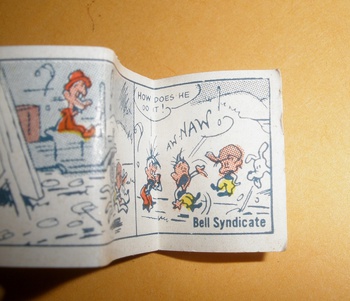 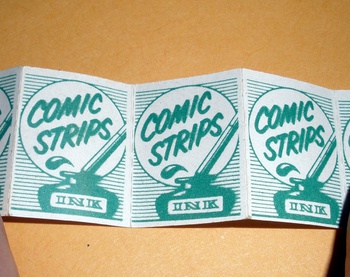 Toonerville Folks by Fontaine Fox featuring one of the Toonerville kids & his pal trying to get away from "The Little Brother" by hopping on Mr. Jones' truck. Little brother (who wears an oversized baseball cap) rides on his dog's back to beat the older boys to where they were going. (There were several Single Comics in the 1930's & 50's featuring the Little Brother.) Not sure what year this is from - but it was produced when Fox worked for Bell Syndicate Newspapers. The little paper clip may date it too, it is only 6/8 inches, and the shape is OLD - a simple folded over triangle..

CONDITION: Perfect - no rips or tears. Has been folded for YEARS.

On the back is 'Comic Strips INK'. (A play on words? Comic Strips Inc.?) I have no idea if that was a brand of ink for comic strips or what! Was this a prize in Cracker Jacks? A giveaway? Placed in cereal boxes as a premium? I have no idea! I just know it is RARE, because I could find nothing like it by Googling!