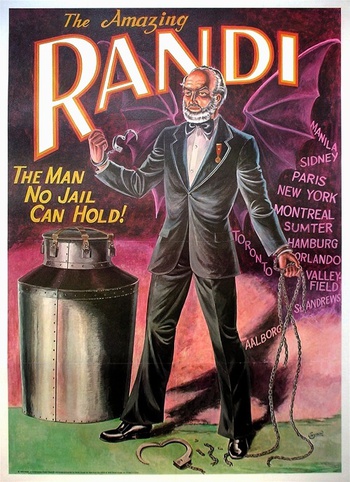 This is an original "The Amazing Randi" offset lithograph from my private collection of Magic posters. It is in excellent condition and measures approximately 25" x 34" circa. 1976

Randi's career as a professional stage magician and escapologist began in 1946. Initially he presented himself under his real name, Randall Zwinge, which he later dropped in favour of "The Amazing Randi". Early in his career, he performed numerous escape acts from jail cells and safes. On February 7, 1956, he appeared live on The Today Show, where he remained for 104 minutes in a sealed metal coffin that had been submerged in a hotel swimming pool, thus breaking what was said to be Houdini's record of 93 minutes.

This particular poster bears a secret message carefully hidden by Randi within the artwork that reads "Harry Houdini".....can you find the hidden message?