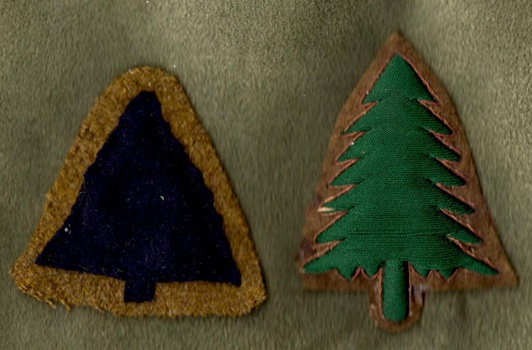 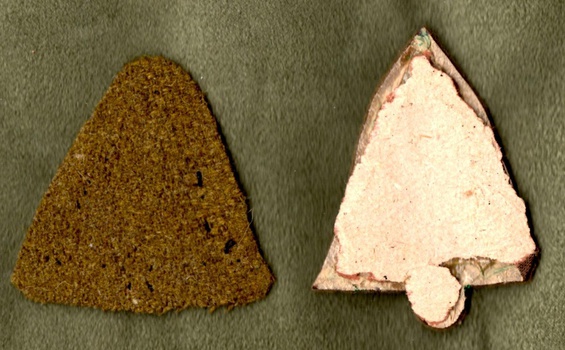 In response to the insignia on Petey’s helmet, I thought I would share a couple of 91st “Evergreen Division” shoulder patches. As you can see, there is variation on the rendering of the tree. The left one was likely made during WWI, while I suspect the more elaborate one of the right was made shortly after the war, possibly to spruce up a veteran’s uniform (pun unintended, but made me smile upon re-reading my post, so I’ll leave it in).

The left one is simply two pieces of felt sewn together, a black tree on olive drab. The right one appears to be green silk thread, slightly padded beneath, and is edged in gold bullion thread on olive drab felt. It appears to have been glued to cardboard at some point, but beneath that is a stiff beige backing that was obviously on the felt when it was cut out.

The 91st arrived in France in July 1918, and served in the Meuse-Argonne and Belgium. It spent 14 days in active sectors and advanced 34 kilometers against the enemy while capturing 2, 412 prisoners. It suffered 1,414 battle deaths and 4, 364 wounded.

The division also happens to be a special interest of mine, as many of the men who served in it were from my home state of Washington, and they trained a few miles away from where I type this – Joint Base Lewis-McChord, then known simply as Camp Lewis.