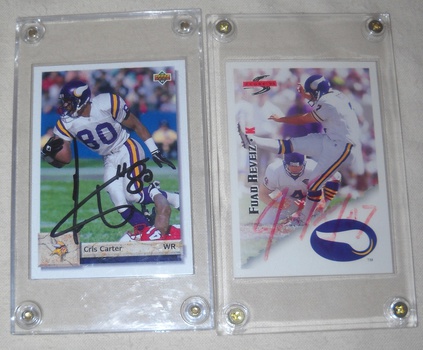 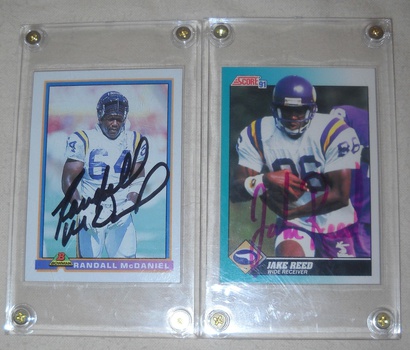 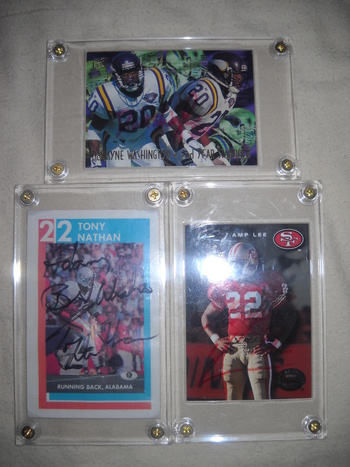 Some of my most prized football cards. When I was twelve years old I came home from school one day my mother told me to get in the car because we were going somewhere, but she didnt tell me where. When we were in the car she told me Cris Carter was signing autographs at the mall. I was immeditately thrilled but my next reaction was "I don't have a card to sign!" So she pulled one of my cards out of her purse, in a plastic sleeve to protect it. (She's a smart one) We got there and we were about fifth in line. I met him, got my picture with him, and he signed my card and an 8x10. Later that season he set the record for most receptions in a season with 122 (since broken). And I had instant bragging rights over my friends. Around the same time, there was a sports bar and grill called "Benchwarmer Bob Lurtsema's". He was a former defensive linemen in the 1970s that played back up to the "Purple People Eaters". Every sunday night of a home game Bob had a current Viking come in and sign autographs. That is where I got the other signed cards. Fuad Reveiz, incidently this was the year he set the NFL record of consecutive field goals made. (since broken) Randall McDaniel...the nicest professional athlete I have ever met, Jake Reed, the shyest. The last two Vikings are DeWayne Washington and Amp Lee. I didnt have an Amp Lee Viking card because he had just joined the team. The last card, the Miami Dolphins Tony Nathan "Police Card" has always been a special card. My family lived in southern Florida when I was three years old. Some players were handing out these cards and signing them. I was only three, I dont remember it, but he was the first professional athlete I met, and my first autograph. My brother got Kim Bokamper to sign his card. A side note...if possible, always have your cards signed in black ink, for obvious reasons. 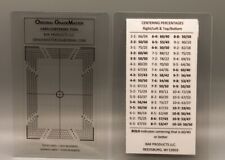 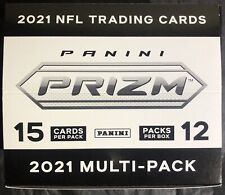 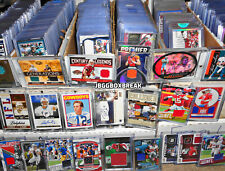 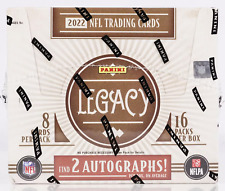